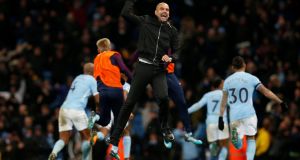 It was an extraordinary finale and there might not have been a better goal celebration here since the day Sergio Agüero pulled back his right foot to slash in the goal against QPR that won Manchester City the league championship here in 2012. Raheem Sterling was at the front of the chase and, behind him, it was difficult to keep count of the number of team-mates, substitutes and coaches who wanted to join the fun. Even Benjamin Mendy, currently rehabilitating from major knee surgery, was in pursuit, limping back with a smile on his face.

Sterling ran the whole length of the pitch after the brilliant curled finish, five minutes into stoppage time, to maintain City’s winning run just as it had seemed as though Oriol Romeu’s 75th-minute strike was going to stop the sequence. City have made it 19 victories in a row, including a club-record 12 in the Premier League, and these are these are the moments that title-winners tend to look back upon at the end of the season.

They began their latest assignment with David Silva on the bench, Ilkay Gündogan starting his first league fixture in almost a year and Leroy Sané missing because of a virus. Gündogan was prominently involved but Silva, more than anyone, makes this team tick and perhaps it was inevitable, with the Spaniard given a rare break, that City found it difficult sometimes to find their usual fluency.

Southampton might also feel aggrieved they did not make more of the two first-half opportunities when City’s hesitancy at the back provided a stark reminder that Guardiola’s team, despite all the superlatives that have been attached to their performances this season, cannot be thought of as completely flawless.

Guardiola, to be fair, has said the same himself and they certainly looked vulnerable at set-pieces, leaving the distinct impression that this might be a part of the game that City’s attack-minded coaches neglect on the training pitches. Wesley Hoedt headed the ball against the crossbar from his team’s first corner and Maya Yoshida, who had supplied the flick-on, really ought to have done better when another one was swung into the penalty area, this time from the opposite side. Virgil van Dijk headed the ball down and Yoshida jabbed out his right boot to volley over. He was inside the six-yard area, unchallenged, and it was difficult not to think Southampton might regret those missed chances.

That opening half has to rank as one of the more disappointing 45-minute periods of City’s season, not only missing Silva’s creativity but also the penetrative attacking play of Sané. The atmosphere was flat and, though Kevin de Bruyne added some refined touches, it was strange to see a team that had scored 42 times in their previous 13 fixtures finding it so difficult to get behind their opponents. Guardiola had said recently that it would be difficult for him to play Agüero and Gabriel Jesus together and there were not many occasions when they linked up together effectively.

Southampton certainly made it a more awkward night than many people might have anticipated, with Mario Lemina often catching the eye in midfield, and Vincent Kompany looked as though he might be feeling the effects of playing three league games in 11 days after his long absence. Kompany was booked for one challenge on Shane Long and fortunate, perhaps, not to have been shown a yellow card after catching the same player with his arm. Kompany could be seen raising an apologetic hand to Guardiola on the touchline after one moment of carelessness, having noticed his manager’s own frustrations.

Yet the night swung in City’s favour quickly after the restart. Barely a minute into the second half, De Bruyne whipped a low free-kick towards the near post. Nicolas Otamendi was initially credited with the goal but it was actually Van Dijk’s foot that connected with the ball and inadvertently turned it beyond Fraser Forster.

Forster’s erratic performances this season have led to his absence from the England squad but he had an impressive game here and, on this evidence, he might have come out of that difficult spell when he was letting in far too many shots. The own-goal had completely changed the complexion of the match and it took Southampton a while before they re-emerged as an attacking force.

Mauricio Pellegrino’s side always played with an impressive structure, with Romeu fundamental to it, but it still came as a jolt when the equaliser arrived.

Ryan Bertrand supplied the cross from the left but it was the brilliant first touch from the substitute Sofiane Boufal that created the real danger. There have not been too many occasions when Fabien Delph has been caught out since he took up his new role as an experimental left-back but this was one. Boufal killed the ball dead, turned away from his opponent and picked out Romeu to fire in a rising shot. Yet City were not finished and Sterling’s curling shot was measured beautifully to pick out the top corner. – Guardian service