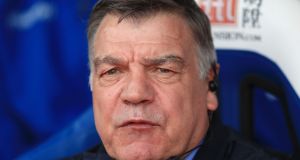 Everton have re-opened talks with Sam Allardyce to take over as manager, according to reports.. John Walton/PA Wire

Everton are considering fresh discussions with Sam Allardyce regarding him becoming their new manager, after initial talks with the 63-year-old previously broke down when he was first approached earlier this month.

Allardyce’s status as a potential candidate once more indicates how desperate Everton have become to find a permanent successor to Ronald Koeman after the first contact with him is thought to have broken down due to the length and terms of the contract he was offered.

Five weeks have passed since the Dutchman was sacked on October 23rd and David Unsworth, the Everton Under-23 manager, was appointed as caretaker. Yet the team’s form has continued the downward spiral that led to Koeman’s removal.

Unsworth has overseen five defeats in his seven games in charge in all competitions, managing just one win. Sunday’s 4-1 loss at Southampton left Everton with 12 points, two above the relegation zone, after 13 matches.

After the first round of talks broke down it is understood Allardyce was minded to reject any further overtures from Everton. So if the club is to try and engage with him again, Fahad Moshiri, the owner, may have to offer far better terms for him to reconsider.

The move would also signal that Everton have given up on trying to prise Marco Silva from Watford. The Hertfordshire club have made it clear they are not minded to allow the Portuguese to depart, which has narrowed Everton’s options.

Should Allardyce be open to any Everton approach he may also ask for a level of control over transfers following what has proved to be the disastrous policy of the summer window, which was overseen by Steve Walsh, the director of football. Walsh joined from Leicester City in what was viewed as coup for the Merseyside club.

But following Romelu Lukaku’s £75m sale to Manchester United, Walsh failed to sign a centre-forward to replace a striker whose tally of 88 Premier League goals since 2012 was second only to Manchester City’s Sergio Agüero.

After Everton saw their interest in buying Olivier Giroud from Arsenal rebuffed, three players who are natural No10s were instead signed – Wayne Rooney from Manchester United, Gylfi Sigurdsson from Swansea City, and Ajax’s Davy Klaassen.

This resulted in Koeman being forced into playing Oumar Niasse on occasion, a No9 who had been out of the first-team picture last year. While the Senegalese has scored six times in nine appearances in all competitions, Everton have only managed 13 league goals this term.