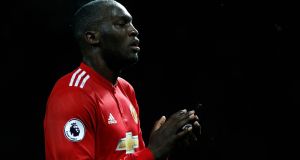 Images appeared to show the 24-year-old kicking out twice at the Albion defender just before Ashley Young’s strike deflected in off Lewis Dunk to secure Jose Mourinho’s men a 1-0 win.

Lukaku was left sweating on FA action as retrospective punishment for violent conduct would incur a three-match ban, ruling him out of the derby clash with Manchester City.

However, the striker will face no action from the governing body over the incident.

Referee Neil Swarbrick took no action against Lukaku at the time and the incident was confirmed to have been missed by officials at Old Trafford.

As a result, a panel of three former elite referees reviewed the footage independently of one another to advise whether they deemed it a sending off offence.

The decision had to be unanimous for a charge to be brought and clearly was not as Lukaku has escaped punishment.

The outcome will be of huge relief to Mourinho, who was singing Lukaku’s praises after the Brighton match.

The striker has mustered just one goal in his last 10 matches for the club but the United boss is in awe of the Belgium international’s relentless drive, which he believes puts other similarly talented players to shame.

“In the last minute he was fighting and running back like he was in the first minute, so I think it is also a mentality question,” said Mourinho, whose side face Watford on Tuesday evening.

“The way Romelu wins the corner for the goal, the way Romelu ends the game making tackles in the left-back position, that is the mentality I want.

“And, unfortunately, not every player is the same. Players are men, men are different. Men are unique cases.

“Some guys are capable to go into the limits of their efforts and some other guys even with a lot of talent, they don’t manage to do that.