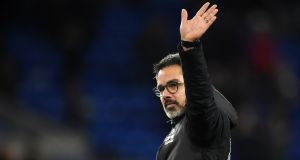 David Wagner has left his job as manager of Huddersfield after a run of nine games without a win, including eight straight defeats, left the club bottom of the Premier League. Huddersfield said the decision had been reached by mutual consent after discussions with the board.

“I know the term ‘mutual consent’ is often a byword for the manager being sacked in professional football, but this is a truly joint decision,” the chairman, Dean Hoyle, said. “David has a real, genuine love for this club and, like me, his foremost concern in our talks has been to establish what is best for Huddersfield Town.”

Wagner took Huddersfield into the Premier League and kept them up against the odds last season but the team have collected only 11 points from 22 games this season, with a lack of goals particularly problematic. The sequence of defeats ended with a goalless draw at Cardiff on Saturday but Wagner has departed nonetheless.

“I had no intention of sacking David this season,” Hoyle said. “Subsequently David – being the great man he is – came to us and made it clear that he needs a break from the rigours of football management.

“We discussed making that change immediately but he also made it clear that he would give his all for the rest of this season before departing in the summer if we preferred. After a long discussion we all felt that David staying at the club until the end of the season was best but we’ve kept discussions open and we all now feel that the time is right to part ways.”

Very few of Huddersfield’s staff had expected the news and, upon the announcement of Wagner’s exit, the atmosphere around the club was one of shock. The affable Wagner earned hero status after arriving from Borussia Dortmund’s second team, leading the Terriers to promotion in 2016-17 and ending their 45-year exile from the top division. They achieved that despite one of the lowest playing budgets in the Championship, succeeding in stunning fashion with a relentless, high-pressing brand of football.

Last season they stayed up against all odds, draws at Manchester City and Chelsea securing their survival with a game to spare. Things have been tougher this time around, Saturday’s goalless draw at Cardiff halting a run of eight straight league defeats but doing little to suggest a squad built with relatively meagre resources can complete a second great escape.

“It’s a very sad day, but now we have to look to the future; that’s what football and our immediate situation demands,” Hoyle said. Mark Hudson, formerly Huddersfield’s captain and now a member of the coaching staff, will oversee Sunday’s home game against Manchester City, after which the next manager’s task may look more ominous. Sam Allardyce, Slavisa Jokanovic and David Moyes are early names to find favour with bookmakers and the club are already in the process of identifying potential appointments. – Guardian service