Coventry shock Stoke to leave Mark Hughes on the brink 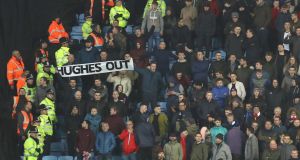 A “Hughes out” banner is held by Stoke fans at the Ricoh Arena in Coventry. Photograph: Matthew Lewis/Getty Images

Jack Grimmer’s winner left Stoke boss Mark Hughes on the brink after Coventry dumped the Potters out of the FA Cup.

Defender Grimmer struck in the second half to push Hughes closer to the exit following the Sky Blues’ 2-1 third-round win.

Coventry boss Mark Robins scored the goal in 1990 against Nottingham Forest which is widely accepted to have saved Alex Ferguson’s job at Manchester United, a team which included Hughes.

Now Hughes’ former team-mate could have condemned him to the sack after a deserved victory for the home side.

Stoke were the first to threaten after 11 minutes when Willis hacked Mame Diouf’s effort off the line.

But it was a scrappy opening, not helped by the Ricoh Arena’s terrible pitch which had been ravaged by the ground-share with Wasps.

Stoke remained comfortable and Stephen Ireland, on his first appearance since May 2016 after a broken leg, fired just wide from 18 yards after 21 minutes.

After a quick break, Max Biamou’s shot was deflected for a corner and, from the delivery, Grimmer knocked the ball across goal for Willis to head in.

Stoke were suddenly rocking and the Sky Blues grew in confidence, pushing forward with more purpose although they still needed to remain vigilant at the back.

With £18million striker Saido Berahino a passenger, Diouf was Stoke’s biggest threat but he wasted a fine chance when he headed into the ground and over from six yards.

The Potters were flat and struggling for inspiration and they twice survived in first-half injury time.

First, Marc McNulty wasted a golden chance when he rounded Jack Butland but rolled his shot across goal, and then the striker was denied by Butland and saw Geoff Cameron clear the ball off the line.

And McNulty was made to count the cost eight minutes after the break when the Potters levelled from the penalty spot.

Ramadan Sobhi was brought down by Willis and Adam sent Liam O’Brien the wrong way to give Hughes a lifeline.

Peter Crouch had already been summoned from the bench to replace the injured Cameron and, with some confidence restored, the visitors went on the attack.

But Stoke were level for just 13 minutes as Grimmer grabbed the winner against the run of play.

The right-back was given too much time to cut in from the flank and his low effort flew past an unsighted Butland.

It sent Coventry through as they survived a late really when O’Brien denied Diouf before, with five minutes left, the striker headed wide from point blank range.

Goalkeeper O’Brien had the final say, turning over Crouch’s volley to condemn Stoke to defeat — and possibly Hughes to the sack.