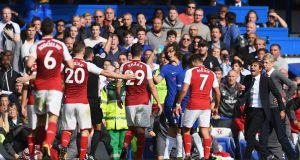 This stalemate ended with a snarl. Frustration had been mounting for much of the afternoon among those in the Chelsea ranks, infuriated at their own inability to generate sufficient verve to steamroller impressive opponents, when tempers spilled over three minutes from time. David Luiz, under pressure from Alexis Sánchez, leapt into a challenge in front of the Arsenal dugout and connected with Sead Kolasinac’s left shin.

The centre half had already been booked earlier in the half, though the referee Michael Oliver flourished a straight red. Antonio Conte led the Chelsea protests in the furious huddle which developed, as the Brazilian stormed off down the tunnel. The Premier League champions have already endured dismissals for Cesc Fàbregas and Gary Cahill this season – having only had three in their previous 73 matches – to add to those by Pedro and Victor Moses in recent meetings with these opponents at Wembley. Moreover, given the cluttered fixture schedule in September, losing David Luiz for three games is a handicap.

They will stew on that as much as Arsenal, the more threatening team for much of this occasion, will revel in having stopped the rot. Arsène Wenger’s side had lost on their previous five visits to this arena and must have arrived braced for a difficult afternoon. Yet this never followed the pre-supposed script. Once they had weathered the visitors’ early whirlwind, Petr Cech denying Pedro from distance, the visitors established an authority in midfield which felt as surprising as it was impressive.

Perhaps Conte regretted leaving out Tiémoué Bakayoko’s strong-arm presence, preferring instead the subtlety of Fàbregas, even if the manner in which the Spaniard sent Pedro free to bear down on goal, only for Cech to conjure a fine save, was a reminder of his class. Yet, without Bakayoko flanking N’Golo Kanté’s energy, Aaron Ramsey and Granit Xhaka imposed themselves impressively and, from that solid core, the visitors made inroads of their own.

Twice around the quarter-hour mark they sliced Chelsea apart down the home side’s left. First Alex Iwobi liberated the galloping Héctor Bellerín only for Danny Welbeck, who would later depart with a groin problem, to plant a header wide. Seconds later it was Ramsey who picked his moment cleverly to send Bellerín beyond Marcos Alonso to the byline, with Thibaut Courtois eventually smothering Alexandre Lacazette’s attempt to guide in a shot at the near post. Both chances were impressively created, and the fact they had been passed up felt wasteful. But it was another, squeezed out four minutes from half-time, which had those on the visitors’ bench cursing.

Yet again it was Ramsey, revelling in central midfield, who cut Chelsea open, easing away from Fàbregas and then swerving beyond César Azpilicueta and David Luiz in the penalty area to poke a shot on to the far post. Courtois was helpless, Cahill caught on his heels, yet Lacazette’s awkward attempt to convert the rebound flew high and wide of a gaping goal. The striker had not seen the opportunity coming. Sánchez, up on his feet with the rest of the Arsenal substitutes in anticipation of celebrating a goal, could only thump David Ospina playfully at his side in disbelief.

Bakayoko, a player made for the Premier League, was duly summoned from the bench, albeit for Pedro, at the interval and immediately reasserted a level of control, though Arsenal did not wilt. Indeed, they thought they had finally prised the hosts apart when, 15 minutes from time, Xhaka’s free-kick was nodded home by Shkodran Mustafi only for an offside flag to choke the celebrations.

Thereafter the frantic nature of the contest rather set in, Eden Hazard’s cameo threatening to earn Chelsea reward until David Luiz’s dismissal as time ticked down.