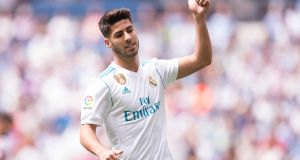 Marco Asensio missed Real Madrid’s Champions League opener on Wednesday night due to an infection caused by shaving his legs.

Zinedine Zidane told reporters ahead of Real’s 3-0 victory over APOEL Nicosia that the 21-year-old would not feature in the game because of a pimple which prevented him from pulling his sock up.

Here’s a look at other sportsmen who have suffered unusual injuries.

South Africa were forced to make a late SOS the night before their third Test against England in January 2016 after wicketkeeper Quinton de Kock slipped and twisted his knee while walking his dog. The injury worsened overnight, prompting a late call-up for Dane Vilas, and while De Kock might want to forget the nature of the injury, South Africa will also want to forget the result after losing by seven wickets, which handed England the series.

In unusual circumstances, Rory McIlroy suffered a “total rupture” of his left ankle nine days before the 2015 Open Championship at St Andrews, forcing him to withdraw. The defending champion posted a picture of himself, via his Instagram account, wearing a protective boot on his left leg after, in his own words, “a soccer kickabout with friends on Saturday”.

Perhaps the most memorable of all, Australia paceman McGrath turned his ankle ahead of the second Ashes Test in 2005 when he stepped on a stray cricket ball during a warm-up game of touch rugby. He missed the Test which England won in thrilling fashion to level the series at 1-1. They would go on to take the series 2-1, winning again at Trent Bridge — another match McGrath missed through injury.

The then England and Manchester United captain Wayne Rooney caused controversy in 2015 when a video emerged of him boxing with former team-mate Phil Bardsley in his kitchen. A blow from Bardsley floored Rooney who fell backwards onto the floor and, after the video was aired, Rooney celebrated a goal against Tottenham by shadow boxing and then pretending to hit the deck. “I was in a house with some friends. Obviously I was caught on the wrong end of a punch, but I wasn’t knocked out like it was reported,” Rooney said.

Norway defender Svein Grondalen probably saw nothing wrong when he put on his running shoes and stepped out for a training run. However, while out jogging he collided with a moose and was forced to withdraw from an international as a result.

Detroit Tigers pitcher Joba Chamberlain knows McIlroy’s pain, having suffered an ankle injury of his own. Back in 2012, when on the books of the New York Yankees, he embarked on some trampolining with his son but came down awkwardly and sidelined himself.

Former England goalkeeper David James was never afraid of standing out from the crowd, but he brought himself unwanted headlines when he injured his shoulder while out fishing, causing himself pain when he tried to land a monster carp. Some of James’ injuries were not caused by other sports, though, for he once pulled a muscle in his back when reaching for the television remote control.

Ryder Cup star Jamie Donaldson suffered a severe finger injury following a mishap with a chainsaw in January 2016. The Welshman, who claimed the decisive point as Europe defeated the United States in September 2014, posted a graphic photo on Twitter of what seemed to be a laceration to the little finger on his left hand. Above the image, he wrote: ”So folks in my time off decided to have a fight with a chainsaw and lost! Oops!! C u in Dubai.”