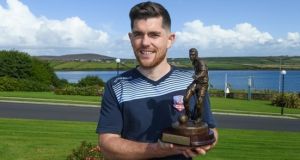 With Drogheda United looking to be something of a lost cause at this stage, Galway United urgently need to step things up if they are to get themselves out of trouble at the foot of the Premier Division.

Shane Keegan admitted last week’s performance in the FAI Cup defeat by Limerick may have been their worst of the season.

This evening Derry come calling and Galway must look to improve on a scoreless draw at home and 2-1 defeat away in their previous meeting this season with Kenny Shiels’ side if they are to close the gap on ninth-placed Finn Harps.

Morale will at least be boosted by Ronan Murray having picked up the Airtricity/Soccer Writers’ Association of Ireland Player of the Month award for August with the 26 -year-old having scored three league and three cup goals, to boost the hopes of supporters that their side can clamber clear of the drop zone.

“We have the players to stay up,” says the striker. “We just need to put a run together quickly. We’ve been down the bottom more or less all season but it only matters who is down there when the season is over. We’re hopeful we can do it and we’re just going to take one game at a time. We have two home games coming up and we’ll be aiming to get four to six points out of them.”

Drogheda boss Pete Mahon is hoping for three points from the visit of Bohemians on the basis that his players, without a league win since April, can play without fear now that so many observers have written them off.

Unlike Keegan, though, Mahon has injury problems to contend with as Colm Deasy, Gavin Brennan and Ryan Masterson are all set to miss out although Stephen Elliott may be fit enough to feature.

In the night’s other game, Limerick, who are still far from out of danger at the bottom, take a full squad to face Bray at the Carlisle Grounds.