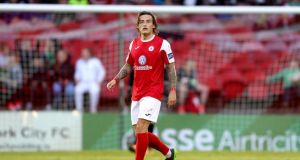 Sligo Rovers snatched a dramatic last-gasp winner through Rhys McCabe at the end of the big north west derby in Ballybofey.

The visitors, who had four players missing through suspension, were forced to make a later change with goalkeeper Shaun Patton starting in place of Micheál Schlingermann who was forced to pull out with a neck injury.

Harps began promisingly with three corners in succession but Sligo took the lead on 17 minutes when Gary Boylan whipped in a cross and Vinny Faherty was on hand to score with a header against the Donegal side, much to the delight of the big travelling support.

Harps went close through Seán Houston on 35 minutes while both sides went close before the break.

Former Northern Ireland international Paddy McCourt equalised in the 84th minute with a mazy run before firing past Patton.

But Sligo then pounced through Scottish signing McCabe and the result means Harps drop back into the relegation zone, while Sligo climb out of it.

1 Spectator sues Tiger Woods and his caddie over incident in 2018
2 My favourite sporting moment: Roscommon minors restore pride to a county
3 Pro14 nations could miss out on €15m in TV revenue if league is not completed
4 Cheltenham cited Boris Johnson’s Twickenham trip as a reason for Festival green light
5 Harry McNulty: Seeing the world, from Sevens to dog-sledding
Real news has value SUBSCRIBE