Dundalk take advantage of sending off to secure cup victory

Goals from McMillan, McEleney and Stewart give Dundalk victory over Shamrock Rovers 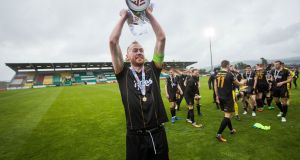 Dundalk secured what they hope will be the first half of a cup double at Tallaght Stadium on Saturday when goals from David McMillan, Pat McEleney and Tommy Stewart gave them victory over Shamrock Rovers in the EA Sports Cup final. The two sides meet again on Sunday week in a FAI Cup semi-final.

McMillan gave Stephen Kenny’s side the lead after just five minutes, but Rovers edged the rest of the first half, and it was a hard fought and fairly even stuff until Aaron Bolger picked up a second yellow card midway through the second period. Dundalk then settled in to clinically drive home their advantage.

Kenny’s defence did well throughout, and Gabriel Sava did not have a save to make. Yet Rovers’ manager Stephen Bradley observed afterwards: “we did create chances, we hit the post and Ronan Finn’s one from the corner just bounces before he hits it... if it doesn’t do that he puts it in the back of the net. So it’s not just about the keeper making 10 saves, we played really well and created chances but you can’t play 10 v 11 against them for 30 minutes, they’re a good side.”

Nobody on the winning side seemed to take issue with much of that. McMillan said: “Rovers were very good in the first-half and put us on the back foot a fair bit. But I think we were better in the second-half, and the sending off changed the game for us. We went on and punished them from there.”

McEleney’s goal, a curling shot from the edge of the area 10 minutes from time was the best of the bunch, while Stewart wrapped things up from close range with one of his first touches after coming on as the game moved into added time.

“I didn’t feel we were comfortable, though,” said Kenny. “I wouldn’t say we were [until the sending off]. Rovers pressed us and you know they can mix it up with their style of play. We were never as fluid as we might have been, but we’ve won a cup final 3-0. I can’t ask for any more than that.”

1 My favourite sporting moment: Roscommon minors restore pride to a county
2 Spectator sues Tiger Woods and his caddie over incident in 2018
3 America at Large: Hurling fan Dowling leading the fight against Covid-19
4 Pro14 nations could miss out on €15m in TV revenue if league is not completed
5 Premier League players launch charitable fund to help NHS
Real news has value SUBSCRIBE