Chelsea hang on against spirited Fulham at Craven Cottage 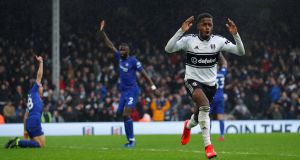 As unlikely as it would have felt in the immediate aftermath of Kepa Arrizabalaga’s histrionics and that penalty shoot-out defeat at Wembley, this has been a restorative week for Chelsea. A second successive derby victory in the period since, albeit one ground out against spirited opposition, has moved Maurizio Sarri’s side back to within two points of the top four, and only five off third-placed Tottenham Hotspur, and all with a game still in hand to fuel hope.

More significantly, perhaps, there are signs of acceptance again amid what had been a mutinous support. Just 10 days after being booed on to the turf by his team’s own fans, Jorginho, a player who personifies Maurizio Sarri’s regime, was serenaded appreciatively by those in the Putney End after his most impressive, progressive display in weeks, albeit against a Fulham side who opted against employing a man-marker to snap at his every touch of the ball. Sarri, too, will have curried favour with successive victories over local rivals and departed with a wave and a smile, while Kepa is re-established as this team’s first-choice.

It was far from easy for the goalkeeper here, with Fulham’s attacking verve renewed under Scott Parker’s caretaker management, but he grew into this contest and, two minutes from time, preserved the visitors’ success. The hosts’ substitute Floyd Ayite had wriggled beyond Antonio Rüdiger and hooked over an inviting centre which was met by a slap from Aleksandar Mitrovic’s forehead, only for Kepa to leap to his left and push away the Serbian’s effort at full stretch. That curtailed the hosts’ hopes, their chances of avoiding relegation slimmer with every passing week. For Chelsea, however, there is optimism again.

They had weathered Fulham’s second half revival but, in truth, should have settled the contest more clearly by the break. Gonzalo Higuaín, revelling in the space afforded him by the home side’s back-line, might have registered his first Chelsea hat-trick even before the interval with the visitors slicing through at will. He had already guided a free header wide and would subsequently blaze over the crossbar from Jorginho’s wonderfully arced pass. Not to be denied, the Argentinean met César Azpilicueta’s low centre emphatically midway through the period to fizz the ball inside Sergio Rico’s near post. That was the first league goal this team had mustered away from Stamford Bridge this calendar year, though they had threatened further reward every time the combinations of Willian and Azpilicueta, or Emerson and Eden Hazard, had scuttled forward down the flanks.

Rico would deny Higuaín after an almost identical build-up in first half stoppage time, this time deflecting the attempt round the upright, with the over-worked goalkeeper having just blocked from Hazard after Denis Odoi’s error. Fulham had actually restored parity by then, though that had merely been a four-minute respite. The hosts, outraged at the non-awarding of a free-kick against Jorginho which had left Joe Bryan out of the game, would be prised apart by another slick counter which culminated in Hazard cutting into the penalty area. The Belgian might have spat away his own shot but, instead, slid a pass across to Jorginho, untracked on the edge of the box, who curled a glorious attempt into the top corner.

That appeared to restore some order, though Fulham had offered plenty of threat of their own in a thrill of a contest. Parker had made only one change from Claudio Ranieri’s last game in charge back in midweek, but there was renewed belief and energy from the likes of Ryan Sessegnon and Tom Cairney, mainstays of the team promoted last May. Their defence may still be porous and obliging, but this side carries an attacking threat.

Kepa, his various punishments spent after that show of petulance late on against Manchester City in the Carabao Cup final a week ago, had endured some uncomfortable moments in the swirling wind and constant drizzle. The Spaniard had spilled Kevin McDonald’s centre in his own six-yard box just after the quarter-hour mark, only to react and recover before Ryan Babel could locate the bouncing ball. His save from Mitrovic’s volley, side-footed powerfully from Ryan Sessegnon’s deflected centre, was a reminder of his qualities, though Chelsea were still undone at the resultant corner.

There is a vulnerability still to this side. No one had tracked Calum Chambers, loitering beyond the far post, as the hosts exchanged passes at the short corner. Babel’s centre drifted over the clutter in the six-box and was met on the volley by the Arsenal loanee, with Kepa helpless and exposed.

The goalkeeper would make smart saves to deny Cairney and Bryan after the interval before that fine save thwarted Mitrovic. Parker, who saw Sessegnon denied an even later equaliser by an assistant’s flag, had developed that familiar look of grim acceptance worn by Fulham’s managers this term by the end. His side had stretched their local rivals, but come away pointless yet again.