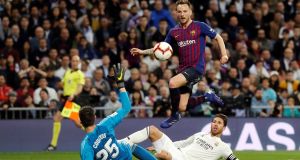 Barcelona were hailed as La Liga champions-elect in the Catalan media after their 1-0 win at Real Madrid on Saturday, while the capital’s press called for sweeping changes at Real after another domestic failure.

Ivan Rakitic’s cool strike in the first half was enough to see off Real and send Barca 12 points clear of their historic rivals, as well as giving them a 10-point cushion over nearest challengers Atletico Madrid.

“They are like champions,” said the cover of Barcelona-based newspaper Sport, describing the win, which came three days after a 3-0 victory over Madrid in the Copa del Rey semi-finals, as “another assault on the Santiago Bernabeu”.

Mundo Deportivo, another Barcelona daily, likened the victory and the team’s jubilant celebrations to “a dance”, adding: “Barca can almost touch the title after killing off Madrid.”

Barca became the first team in the history of La Liga to win four league games in a row at Real Madrid, prompting Sport to gloat about the Catalan side’s hegemony on enemy territory.

“Barca can now take the keys to the Bernabeu, a stadium which they have made their home and where they feel no fear at all, only pleasure,” said the newspaper’s editor.

“Barca strike another blow, leaving Real without the Cup or La Liga in the space of three days,” said Madrid-based newspaper Marca.

Fellow Madrid daily AS said: “Madrid give up” on its front page, and also spoke of it being the end of an era for many of the club’s players who appear to be beyond their best, such as Sergio Ramos, Gareth Bale, Toni Kroos and Marcelo.

“This is a crisis which obliges the club to reinvent itself in the summer in a profound way after a turbulent year,” said the newspaper.

“Changes need to be made in the dugout, as coach Santiago Solari has run out of credit, and above all in the squad, where players with huge salaries and inflated statuses are being shown up.”

1 Leinster get the opponents nobody wanted
2 Liverpool have a shot at genuine legacy season
3 Stephen Scullion completes marathon journey to Tokyo
4 Arteta praises fans’ patience as Arsenal struggle to turn corner
5 Leinster made to work hard to maintain 100 per cent record
Real news has value SUBSCRIBE
Crossword Get access to over 6,000 interactive crosswords