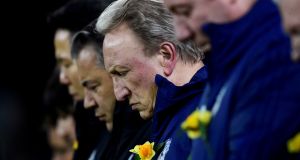 The agent Willie McKay has been unusually public about the central role he played in the transfer of Emiliano Sala from Nantes to Cardiff City, given the player’s tragic death in the fallen private plane in the Channel on January 21st.

Mark McKay, Willie’s son, had a mandate from Nantes to sell Sala to a UK club for 10 per cent of the eventual £15 million fee, and Willie McKay told the Guardian that he worked feverishly to interest Cardiff, persuade Sala to sign and cement the deal. His work included arranging two private flights for Cardiff’s manager, Neil Warnock, to watch Sala play for Nantes.

Both Willie and Mark McKay travelled with Warnock on the flights, the first on December 5th when Warnock was accompanied by Cardiff’s assistant manager, Kevin Blackwell, the second when the club’s player liaison officer, Callum Davies, went.

He had extensive dealings with Warnock and other Cardiff staff to make the deal happen, McKay says, including with the chief executive, Ken Choo, and chairman, Mehmet Dalman.

“I spoke to every Premier League club except Manchester City,” McKay said. “I phoned Neil Warnock and asked if he was interested in Emiliano Sala; he said he was on their list. Then it came out the player didn’t want to come, and I wrote him that letter [an email McKay has also made public, in which he urged Sala to consider signing for Cardiff]. I was on the phone to Cardiff every day for 10 or 15 days.”

McKay insists he hired the private return flight for Sala to say his goodbyes in Nantes because Cardiff offered only scheduled British Airways flights. He says he booked the flight via a pilot he used sometimes, Dave Henderson, and that he did not know which plane would be used or that the pilot would be Dave Ibbotson, whose body has still not been found after the Piper Malibu light aircraft crashed.

Dalman confirmed that he did have one phone call with McKay regarding the transfer and that the McKays did arrange and pay for Warnock’s flights and accompanied Warnock. However, he said the club did not know the details of the flight McKay arranged for Sala after they signed him; McKay insists the club was aware he had arranged the flight.

Yet one central question, among many arising from the terrible, fatal flight and those frantic January transfer dealings, is why McKay was involved in this transaction at all.

A prominent name among the British cadre of agents after the first Sky TV millions arrived in the early 1990s, McKay, 59, who was for some years based in Monaco, is no longer an agent at all. He is not registered as an “intermediary” – the official name for an agent according to Football Association rules – nor is he licensed as an agent in France.

The English and French Football Association rules are strict on insisting that clubs and players may deal on a transfer only with people registered or licensed as agents.

The FA rules, introduced in 2015, are drawn deliberately widely, to acknowledge that agents mostly act for more than one party to a deal. The new term, intermediaries, more accurately describes their activities, as transfer brokers between the clubs and players. The rules are clear that: “A player or club must not use or pay any person for Intermediary Activity unless that person is registered as an intermediary.”

“Intermediary Activity” is defined broadly as well, to take in “acting in any way and at any time, either directly or indirectly, for or on behalf of a player or a club in relation to any matter relating to a transaction”.

The rules specify that clubs are not just prohibited from having a formal contract with an unregistered person but state in guidance notes that “Intermediary Activity” includes: negotiating with a club on behalf of another club; representing clubs or players at meetings, “introducing players to clubs (or vice versa)”, “discussing the terms of possible deals with players or clubs” and “facilitating a transaction by discussing the availability of a player with a club”.

McKay has not been registered as an intermediary since the new regulations were introduced. In March 2015 he was made bankrupt; FA rules disqualify people with bankruptcy orders from being registered intermediaries. McKay was discharged from bankruptcy in August, agreeing to a five-year restriction order prohibiting him from being a director or managing a company, without permission from a court.

McKay said he was working in transfers out of determination to help his son: “I’m helping Mark get to the top, with all my contacts in France. He’s my son, I’ll do anything for him.”

Asked about the FA regulations, and his work on transfers while not registered as an intermediary or licensed as an agent in France, McKay replied: “Why get registered when my son is registered?”

McKay said he arranged a meeting in Nantes for Warnock to discuss possible signings with the Marseille director of football, Andoni Zubizarreta. Dalman insisted none of McKay’s work was done on behalf of Cardiff City; McKay was acting only for Nantes, he said, to try and make the deal happen, which would earn the McKays £1.5m.

“It is correct he flew [Warnock] to watch the player – that’s how he does business,” Dalman said. “He’s not helping us out, he’s helping himself out, because of his whopping fee. He is trying to sell a product; he flies us to see the product because he can’t bring it to us.”

The FA is understood to be taking the same view based on what has been made public: that McKay was not acting for Cardiff but for Nantes, when he had all the dealings with Cardiff and so cannot be said to have engaged in “intermediary activity” for a club under its jurisdiction.

A spokesman for the French FA did not respond to a question about whether there were grounds for investigating whether its rules may have been broken.

Dalman said it was not correct that Cardiff had agreed an extension for paying the first instalment of the £15m fee to Nantes. A Cardiff source said, however, that the club would ensure Sala’s family will receive compensation.