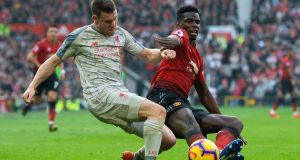 If Liverpool wished to signal serious intent of ending their 29-year wait to be champions they failed. This game in hand over Manchester City featured an under-par performance that will hearten Pep Guardiola’s men, though the draw does leave the Merseyside club leaders by a point with 11 matches left.

The draw suits Manchester United far better and given how Ole Gunnar Solskjær’s XI was upset by three injury-enforced substitutions, all before the interval, the result is a particular morale-booster.

The Norwegian may have overhyped United’s second-half display as “magnificent” but they certainly outplayed Liverpool then and though Jürgen Klopp played down his disappointment he will be concerned regarding how his team failed to fire.

The sight of Klopp appearing near-furious throughout – “animated” was his description – and choosing to take off his star turn Mohamed Salah with 12 minutes remaining summed up how Liverpool stuttered.

Solskjær made two changes from Monday’s FA Cup win at Chelsea. Sergio Romero returned to the bench and Nemanja Matic was out injured so in came David de Gea and Scott McTominay. Jesse Lingard’s recovery from a hamstring problem was advanced enough for him to start as a replacement but Anthony Martial was absent because of his groin injury.

In what would end as a dire, injury-blighted 45 minutes Liverpool rattled United instantly from kick-off. Ashley Young’s back-pass left De Gea short and in desperation the goalkeeper handled the ball. Michael Oliver gave the indirect free-kick outside the six-yard area. A short routine ended with a Milner pot-shot hitting the wall and United escaped.

Much of Liverpool’s possession was down to United errors. The latest meant Joël Matip received the ball and ran through the home side, causing Ander Herrera to shove him over inside the D, and United were relieved to see Salah spoon the free-kick over. Herrera’s act might have been the reason he was forced off on 20 minutes – the Spaniard replaced by Andreas Pereira.

Given Matic’s absence this meant United now had a third choice in midfield alongside the second-choice McTominay, Paul Pogba being the only automatic selection left on the field in that position.

Further injury problems occurred moments later when Juan Mata had to come off, though Lingard’s entrance meant United were arguably strengthened. All this disrupted any rhythm the contest had – a point Klopp used to explain his team’s performance.

And, there was more: on the half-hour Roberto Firmino became the match’s third substitution because of a sore ankle that brought Daniel Sturridge on. Sturridge’s first contribution was a 30-yard pea-roller though this was, at least, some form of attacking act; it would prove Liverpool’s sole attempt on target.

As the interval neared United moved up a gear, putting together the contest’s best move. Pereira intercepted in his half and found Romelu Lukaku. He played in Pogba down the left, who ran on before returning the ball to the Belgian. Lukaku paused, slid a clever pass to Lingard but, when the substitute tried to beat Alisson, the goalkeeper grabbed the ball.

This proved too much for Lingard, though. Having been spied clutching a hamstring earlier he became United’s third casualty. Solskjær stated all three were this same muscle problem and that he may have to assess why.

Lingard had lasted 16 minutes. Alexis Sánchez entered and when the Chilean turned inside from the left and hit an errant pass this was the first half in a microcosm.

The hope was for a higher quality second half but the start hardly augured well. Balls bounced off Sánchez – as they tend to do – and when United moved up-field via Luke Shaw and McTominay the move petered out. Young took two free-kicks, from the right and left, and first Pogba, then Sánchez, were offside.

Liverpool, finally, posed a serious question of United. Jordan Henderson broke along the right and aimed a cross at Sadio Mané but Pereira, not for the first time, blocked.

If the crowd were vocal the contest, too, had livened. When Young pinged a ball on to Marcus Rashford’s toes the young striker required a slicker touch than that which allowed Alisson to clean up.

United were in the ascendancy and Klopp in a perma-rage, unhappy at his side’s sluggishness. Pogba was next to threaten but slipped when crossing and Alisson, again, gratefully collected.

Liverpool, perhaps remembering this was their match in hand over City, did now pin United back. Henderson looked to play in Salah but Shaw stymied this with his head. Young did the same to a Milner ball and Georginio Wijnaldum’s cut inside was followed by a wild effort.

The first tactical substitution came on 71 minutes, Klopp replacing the disappointing Henderson with Xherdan Shaqiri. The German continued to be upset – taking aim at the Swiss for lax defending – while having the countenance of a man baffled at what he witnessed.

At the close Chris Smalling had a golden chance to convert Lukaku’s cross but there was no grandstand finish. – Guardian