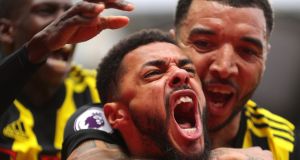 Nobody said Brendan Rodgers had taken the easy option in swapping Celtic for Leicester. His new charges seemed to have done enough to draw against a committed, dynamic Watford team who led for much of the game after Troy Deeney’s fifth-minute goal. They clawed their way back through Jamie Vardy but it was a substitute, Andre Gray, who ran through in added time to undo their best work and send Javi Gracia’s side level on points with seventh-placed Wolves.

Rodgers was announced over the PA system as the ‘former Watford manager’ before kick-off but the boos that followed rang more of duty than spite. All parties have fared well enough in the decade since Rodgers, in a move he has since admitted regretting, departed for Reading after only six months at Vicarage Road and it would have taken some energy to create a genuine cauldron of venom.

In the event Watford’s fans could exercise themselves more vociferously within minutes of kick-off. Their team roared out of the blocks and could even have scored before Deeney’s opener, Kasper Schmeichel saving at close quarters from Adrian Mariappa and watching in relief as Wes Morgan dived in to block Gerard Deulofeu’s attempt on the rebound.

That near miss came after Leicester failed to deal with a right-sided free-kick but they were less fortunate when danger arose, almost immediately, on the other flank. This time Deulofeu could size up a set-piece just outside the penalty area and his whipped, venomous delivery was the kind that renders defences almost helpless. It only needed a touch and Deeney applied it, the faintest of flicks carrying the ball at speed beyond Schmeichel. Replays suggested Deeney had been offside by a shoulder’s width but, in a VAR-free environment, it is no disgrace that decisions this marginal should favour the attacker.

Rodgers had put down an early stamp by recalling Morgan and setting Leicester up with a back three. They had only used that system once under Claude Puel and it was natural that Watford, in their formidably drilled 4-4-2, would initially be more at ease. Leicester responded to the goal with flickers of promise but their first half was one of nearly moments rather than clear chances. Mariappa had to deny Vardy with a smart interception, while Harvey Barnes could not control a close-range effort after Ben Chilwell had drilled across goal.

Vardy might have fancied his prospects of scoring if Mariappa had not fouled him 40 yards from goal, the defender’s slip having created the opening. Had the incident occurred closer in then Jonathan Moss would surely have had to send Mariappa off. Vardy may well have got away in any case and his frustration was compounded when, from the resulting free-kick, he was clattered by Ben Foster as the goalkeeper ran out to punch. The collision looked excruciating; both men required treatment but, thankfully, a three-minute delay was the extent of the damage.

This had all happened within an opening 20 minutes that was contested at a rattling pace. It could not continue and Leicester, whose best moves developed when Youri Tielemans was allowed to play forward to the similarly-silky James Maddison, achieved a degree of stability for the rest of the half but did not find incision to match.

Watford’s threat had diminished but they almost began the second period as they had the first, Schmeichel batting away a well-struck effort from range by Abdoulaye Doucouré. The most noteworthy Leicester contribution at this point was the away end’s chant of ‘We all hate Celtic’ – referring to the derision Rodgers’ move has sparked upon some of the Scottish champions’s fans – although, as that ditty reached its conclusion, Harry Maguire could have done better than fire over on the stretch after Chilwell’s free-kick had found its way to the far post.

The home side were their punchy selves and, when their level of physical control spilled over, they saw Étienne Capoue, Doucouré and Deeney all booked within seconds just after the hour. The latter decision was harsh; Schmeichel had narrowly beaten Deeney to clear a through ball and the follow-through seemed harmless. If anything it suggested Leicester could now be exposed on the break.

When Wilfred Ndidi’s 75th minute cross caught the wind and clipped the crossbar it was, for all their possession, as close as Leicester had come. But their equaliser arrived within moments. The outstanding Tielemans slid in Vardy, who had come back from an offside position and lurked unattended along the defensive line; the finish, nudged past the onrushing Foster with the outside of a boot, was exemplary.

The wind was in their sails now and Morgan, reaching Maddison’s left-wing cross, headed wide in the final minute of normal time when a winner was begging. A draw seemed fair but Gray, running on to Deeney’s reverse pass after a Leicester clearance had been headed back towards the danger zone, finished coolly to spark wild celebrations in the home dugout and stands.

1 Seán O’Brien: Anger over my parents’ break-up never left me
2 Plenty of positives for Farrell as Ireland hit the ground running
3 Ireland braced for a daunting assignment in Paris
4 Will Connors chops his way to the front of Ireland’s openside queue
5 Ireland 50 Italy 17: Ireland player ratings
Real news has value SUBSCRIBE