Championship round-up: Conor Hourihane among the goals in Villa win 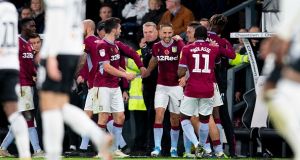 Aston Villa produced a superb second-half performance to blow away Derby 3-0 at Pride Park as John Terry put one over on his former Chelsea team-mate Frank Lampard.

Another Irish midfielder,Callum Robinson, scored the only goal of the match as Preston inflicted a 1-0 defeat on Bristol City at Ashton Gate.

The goal came after 35 minutes when sloppy City defending led to Daniel Johnson bursting into the box and crossing low from the right for the unmarked Robinson to tap home at the far post. Preston were the better side throughout and the hosts left the pitch to a crescendo of booing from disgruntled fans as their dip in form continued.

Jordan Rhodes and Teemu Pukki struck in stoppage time as Norwich recorded an incredible 4-3 victory over Millwall at Carrow Road.

Having thrown away a 2-1 lead in the closing stages to go fall 3-2 behind, Rhodes and Pukki helped the Canaries to a fifth successive league win in dramatic circumstances.

Pukki had cancelled out Tom Elliott’s first-half opener and then saw his penalty saved by Millwall goalkeeper Ben Amos before Moritz Leitner edged the Canaries in front.

But in an astonishing final 11 minutes, Ryan Leonard and Murray Wallace thought they had pinched the points for the Lions only for Rhodes to level and Pukki to pounce in the seventh minute of stoppage time.

Che Adams scored a hat-trick as Birmingham came from behind to earn a point against battling Hull at St Andrew’s in a thrilling 3-3 draw.

Birmingham looked to be coasting at half-time as they led this encounter 2-0 after Adams punished two mistakes in defence by the visitors. But Hull struck back after the break as a Fraizer Campbell double and a fine Kamil Grosicki free-kick put the visitors on top. Adams had other ideas as he shot through a crowded area late on to earn his side a point.

QPR scored three times in the space of 10 second-half minutes to beat Brentford 3-2 in the west London derby at Loftus Road.

Neal Maupay put the visitors ahead in this Sky Bet Championship clash midway through the first half with his 12th goal of the season.

But the French striker was carried off on a stretcher in the final seconds of the half — and things got much worse for the Bees after the interval as goals from Massimo Luongo, Joel Lynch and Nahki Wells gave Rangers victory.

Bradley Dack’s late goal gave Blackburn a 1-1 draw with Rotherham in a game that they should have won at Ewood Park.

The visitors looked on course for their first Sky Bet Championship away win since April 2016 when Michael Smith’s header gave them a 75th-minute lead — their only shot on target. But Dack’s 10th of the season salvaged a point that would have been so much more were it not for a stellar goalkeeping performance by Marek Rodak.

New Ipswich manager Paul Lambert is still without a win in two Sky Bet Championship matches in charge as his side drew 2-2 at Reading.

The contest opened at a frantic pace, with three goals in a six-minute spell.

Gwion Edwards gave Ipswich an early lead but Reading were soon level when Yakou Meite netted with an acrobatic effort. Ipswich swiftly recovered and were back in front by the 11th minute, when Freddie Sears took advantage of hesitancy in the home defence. Reading improved after the break and were rewarded when Meite headed home in the 84th minute.

The England international pulled off a stunning stop to deny Joe Lolley late in the game, before then making himself big in injury time, just when Lewis Grabban seemed certain to snatch the spoils for the home side at the City Ground.

All five Championship clashes between Gary Rowett and Aitor Karanka have now ended in draws and that was probably a fair outcome here.

Swansea ended 38 years without a win at Bolton as Barrie McKay’s first goal for the club clinched a 1-0 Sky Bet Championship success at the University of Bolton Stadium.

Hugill opened the scoring from the penalty spot after George Friend was upended in the box, and found the net again on the stroke of half-time with a close-range half-volley.

1 Tipping Point: DeChambeau’s transformation raises questions, but who will ask them?
2 Ken Early: Resurgent United can be the top team – in Manchester
3 Monica Seles: The warrior queen who could have been the best ever
4 The Game Changers: How Jonah Lomu’s dramatic arrival heralded rugby’s new dawn
5 Lewis Hamilton: I was ‘silenced’ over Colin Kaepernick
Real news has value SUBSCRIBE