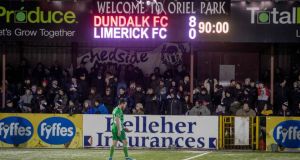 The exact nature and scale of the difficulties at Bray Wanderers may be yet to emerge but between the Wicklow club not having a home strip for their game against St Patrick’s Athletic and the lights only coming on ever so dimly at Drogheda's United Park, quite a bit of the league’s preseason “brave new world” buzz evaporated on Friday night.

Things haven’t been helped since by a division cut in size in part, it was said to make it more competitive, producing 6-0 and 8-0 wins with Wanderers on the receiving end of the former in Tallaght the other night.

Bray’s ability to land the Premier Division licence it required to play in the top flight this season had, as it happens, been the subject of some close season debate. The tweet the club issued to express its “delight” at having been awarded one just a couple of weeks before the season kicked off seemed to suggest there was some surprise at the successful outcome even within the club.

Officials elsewhere also wonder aloud just how Athlone Town or Drogheda United got their licence, although in reality everyone should be way past the stage of being surprised by any of this. The licensing scheme is a stick the FAI can use to try and keep the clubs on course and in line but the reality is everyone involved knows that the show has to be kept on the road. We can only speculate what a club would actually have to do to find itself excluded but it is surely beyond our wildest collective imagination.

Drogheda’s mishap is particularly embarrassing for everyone at Abbotstown given when there was a problem on the opening night of last season that caused the start of Athlone’s game against Waterford to be put back, the association ordered an audit of every club’s lighting facilities to ensure that sort of negative publicity was avoided in the future. The FAI, of course, actually owns United Park.

Asked about the various licensing decisions arrived at over the close season, the league’s director, Fran Gavin, adopted the usual line about the process being independent of the association and, it was suggested, pretty much beyond question.

Down the years, though, The Irish Times has had occasion more than once to ask about the reasoning behind the awarding of particular licences. Issues have included Dundalk’s contractual control of their ground during the dragged out dispute with Gerry Mathews a couple of years ago, the late change of ownership/structure at Wexford last year and the manner, back in 2010, in which the ownership of Limerick was transferred from Jack McCarthy to Pat O’Sullivan.

Athlone Town, meanwhile, got a Premier Division licence this year despite being in dispute with the man who bailed out their stadium and sought to make it available to the club for a nominal rent. The club has not been paying that rent and was back in the High Court last week trying to get direct control of the facility on the basis that the €660,000 he spent was a gift; something he denies.

In these instances and, it seems safe to presume, quite a few more there have been big questions, no answers but always licences.

A glimpse of the association’s attitude to it all was given back in late 2012 when this paper ran a story about a letter signed by John Delaney and then league president Paddy McCaul to Derek Dee, then the chairman of the licensing committee, in March of that year.

By then, the relationship with O’Sullivan had turned sour and the association was openly expressing its disappointment with the committee for the lack of restrictions imposed as part of the licensing process on the club’s still relatively new owner.

The failure to require O’Sullivan to lodge 50 per cent of his funding for the 2012 season in a non-recourse bank account prior to the start of the campaign, as it had done in 2011, was causing the association, “some difficulty,” it was claimed, “as there is concern among the board that, given the history of Mr O’Sullivan’s relationship with the association, there is a real and continuing risk that he may follow through on his threat to withdraw support from the club mid-season”.

The letter alleged a number of previous threats by O’Sullivan to withdraw his support for the club and take a legal action against the association’s bank and suggest that Delaney and McCaul “believe that information on both of these issues may not have been presented sufficiently strongly”.

“The board,” the letter concluded, “would like the committee to take this into account when dealing with Limerick FC in future”.

Six years on, it is hard to see any reason to believe that anything has really changed. Back then the association lamented the fact that the committee’s decisions “have to be managed ultimately by the board on an ongoing basis”. The fact that everyone since has, one way or another, sooner or later, got through the process inevitably prompts the suspicion that there might be a degree of understanding these days on the committee’s part of the predicament it has the potential to put the association in.

Former Shelbourne chairman Gary Brown reacted on Twitter to some of the criticisms aimed at the association in recent days by making the point that the clubs have to take their share of the blame. He’s right, the association is caught in a bind because of its obligation to keep the league going despite the endless run of crises that afflicts our clubs.

The contention by its critics that the FAI is to blame for that because of the lack of support it has provided to the league and its clubs is a debate for another day. In the meantime, though, just spare us the platitudes about the sanctity of the process.