Euro 2020: Ireland to face Spain, Poland and Sweden if they qualify 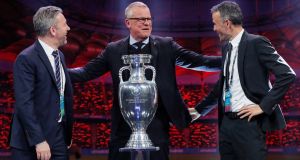 Poland coach Jerzy Brzeczek, Sweden coach Jan Andersson and Spain coach Luis Enrique during the Euro 2020 draw in Bucharest. Spain, Sweden and Poland were all drawn in Group E along with the playoff winners from Path B. Photograph: EPA

Ireland will meet Spain, Poland and Sweden in the group stages of Euro 2020 should Mick McCarthy’s side qualify through the playoffs.

The draw for the finals was made in Bucharest on Saturday evening with Poland and Sweden completing Group E which was already assigned to Spain and the winners of playoff Path B which will be one of Ireland, Slovakia, Bosnia and Herzegovina or Northern Ireland.

Mick McCarthy didn’t make the trip to the Romanian capital for the draw and it was a strange affair given that 16 playoff teams were included despite the fact that only four will actually make it to the finals.

The meeting with Sweden will be a repeat of Ireland’s opening group stage match at Euro 2016 when Wes Hoolahan’s goal secured a 1-1 draw while the last time Ireland met Spain at a major tournament was at Euro 2012 when the Spaniards ran out 4-0 victors.

Dublin will also host one last 16 match and that could prove to be quite the affair as it will feature the winners of Group D (England, Croatia, Czech Republic and Scotland, Israel, Norway or Serbia) against the runners-up in group F.

And it is Group F which looks very much to be the group of death. Germany were already assigned to that group and were joined by defending champions Portugal and World Cup winners France as well as the winners of playoff Path A (Iceland/Romania/Bulgaria/Hungary).

England will also play all three of their group games at home in Wembley and will face Czech Republic, who recently beat them in qualifying, in their final group game while they could also play Scotland should the Scots negotiate their way through the playoffs.

“We were very poor in Prague and they have improved, there is no doubt about that,” said Gareth Southgate of Czech Republic. “We have to be on our game and it won’t be like our first game at Wembley that is for sure.”

With the prospect of topping the group throwing up a challenging tie, many could be forgiven for thinking Southgate would prefer to advance in second place – but he does not see it that way.

“It is a bit like we were before today,” he said. “If you can win and be top seeds you can take control of your own destiny. Let’s hope we have that decision to make, we have to be confident in our own ability and take on whoever comes.

“I’m never sure what a good draw is. “We have played at least two of the teams before and for us to be playing at Wembley is something very special and we are really looking forward to the tournament.”

Wales face perhaps the most gruelling schedule as they meet Switzerland and Turkey in Baku, 5,000km from Cardiff, in the space of four days before travelling to Rome to take on Italy in their final group match.

“So rather than having Rome in the middle and having to go to Baku (twice) for us and the fans it is much better.

“At this stage they are all tough games, Switzerland are a good team and I watched their progress, Turkey were in a group with France and Iceland and did well to come out of that and of course Italy had a fantastic qualifying by winning every game.”

The semi-finals and final will all be at Wembley, with the final itself being played on Sunday, July 12th.

Playoff winner from Path A (Iceland/Romania/Bulgaria/Hungary)*

* If Romania win playoff A, they will be moved to Group C and the winners of playoff D will move to Group F.