All in the Game: Marikar’s maverick Ballon d’Or picks

Misunderstandings, angry sisters, apologies, quotes of the week and more 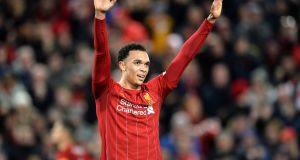 According to Hafitz Marikar, Trent Alexander-Arnold is the best player in the world. Photo: Peter Powell/EPA

It’s become an annual sport following the release of the votes for the Ballon d’Or to check what mad choices some of the world’s football journalists made for the big prize, and for the third year running Sri Lanka’s Hafiz Marikar found himself in the spotlight.

In 2017, he chose Italian centre-back Leonardo Bonucci as his winner, in 2018 he went for Eden Hazard, and this year he picked ... Trent Alexander-Arnold. In second he had Pierre-Emerick Aubameyang, in third Antoine Griezmann, in fourth Robert Lewandowski – the only player to make the top 19 in the actual vote – and in fifth he had Barcelona goalkeeper Marc-Andre ter Stegen.

Where were Lionel Messi, Virgil van Dijk, Cristiano Ronaldo, Sadio Mane and Mo Salah, 2019’s top five? Nowhere. In fact – and make sure you’re sitting comfortably – Marikar has never once had Messi in his top five, never mind as his winner.

How impressed was USA Today’s Nate Scott? Not very. “I one day hope to meet the man who believes that Trent Alexander-Arnold is the best player on Planet Earth. I want to sit with Mr Marikar, and have coffee, and ask him about other opinions he holds dear. Does he believe that fish can beat lions in a fight on land?” That’s a chat you’d pay to see.

Misunderstanding of the Weekend

In fairness, the celebration did look suspiciously similar to said gesture, but it turned out that the North Macedonia international was actually pointing at Leeds general manager Matt Grice on the bench and taking the mickey out of the moustache he began growing last month.

“I need to laugh because what people think, it was for [Matt] because he grew his moustache for Movember and he isn’t shaving it until we lose,” said Alioski after the game. “It’s lucky and after I scored it was a celebration for him, it was not about other things – it was about his moustache.”

And with that the headline was changed to “Leeds United’s Ezgjan Alioski explains celebration after Nazi salute accusations”.

Apology of the Week

That would be the one from former Manchester City and England winger Trevor Sinclair who let emotions get the better of him after City beat Burnley on Tuesday night, a result that prompted him to tweet this message to Liverpool: “Bin dippers we’re coming for you!”

Which called to mind that loving tune non-Scousers are oft heard directing at the Liverpool faithful: “You look in the dustbin for something to eat, you find a dead rat and you think it’s a treat, in your Liverpool slums...”.

Next morning: “To any fan that was offended by what I wrote last night I apologise. It was a throw away line regarding closing the gap. It wasn’t my intention to offend anyone, especially from a social stance. I’m a working class lad and understand how it’s been taken. Sorry.”

When City’s title hopes appeared to end up in the dustbin come Saturday evening, @TheKopHQ couldn’t resist sending its own message to Trevor. “14 pts now kid. Regards, the ‘bin dippers’.” Followed by a fist bump. In modern terminology that’s what you call ‘owned’.

“Parrott on for Spurs. Loves playing off the shoulder of the last man.” – Gary Lineker showing no shame after our Troy came on to make his league debut for Spurs on Saturday.

2020: Just a reminder of when John Delaney reckoned the FAI would be debt-free.

“When I got the ball I tried to pass it to Dele but I couldn’t find him so I put my boost on. After two or three seconds I was in front of goal, so I was a little surprised.” – Heung-min Son describing how he scored that wonder goal on Saturday. It some boost he put on.

“Racist? I am Catholic, I can’t be.” – Brescia president Massimo Cellino, eh, explaining why he can’t possibly be racist despite jesting about Mario Balotelli “working to whiten himself – but he has great difficulties in this”.

“I would say that my start has been a bit negative.” – Arsenal’s Pepe seals the award for understatement of the decade.

“You would think he’d be out in a suit to show a bit of proudness that he took the job. To me that’s a great start – shirt and tie to show some discipline. I don’t think he’ll be the right man.” – Paul Scholes criticising Freddie Ljungberg for sporting a jumper instead of a suit when he took charge of Arsenal last week. At which point a photo was circulated of Scholes sporting a sporting a jumper instead of a suit for his first game as Oldham gaffer. Ooops.

Pope could have stones on his tail

When Port Vale striker Tom Pope watched England losing 3-1 to the Netherlands in their Nations League semi-final back in June, there was one English player who caught his eye. And not in an entirely positive sense.

“I know I’m a league 2 player, I know he plays for England, I know he’s on £150k a week, I know he’s a million times better player than me but I’d love to play against John Stones every week! I’d get 40 a season! #soft #weakaspiss …. as a target man you could wear him like a Johnny! Just got absolutely zero aggression!”

Who were Port Vale drawn against for the third round of the FA Cup? Manchester City, of course. If he can recover in time from the injury he picked up on Saturday, you’d guess Stones would very much like to be selected for the tie in which he would, you’d guess, display 110 per cent aggression towards the striker he’d be marking.

Angriest Sister of the Week

Yet again, this much cherished gong goes to Katia Aveiro who never takes kindly to her little brother Cristiano Ronaldo being ‘disrespected’. You might recall that when the statue of him in his native Madeira was daubed with “Messi 10”, she emoted quite passionately, concluding “my beautiful island is inhabited by some frustrated savages who deserve to live in Syria among people that show no respect and hold no value for life in society”.

And last week, when Ballon d’Or runner-up Virgil van Dijk joked about the absence of Ronaldo from the ceremony? [Reporter: “Cristiano won’t be here tonight, so that’s already one less rival to care about.” Van Dijk: “Was Cristiano Ronaldo really a rival?”]. Well, Katia took to Instagram. The gist:

“My dear Virgil, Cristiano Ronaldo was a three-times champion in the country where you have been playing for years and you still haven’t got your hands on the trophy …. that fellow Ronaldo, and team-mates, crushed your ‘Oranje’ in a final. Was it hard, Virgil? We have pity …. now Virgil, [you go and] win titles that really count and then we’ll talk. When you have a handful of them, the really important ones, you might be able to sit at the table with Cristiano.”

That was Virgil told.

Arsenal deny Chelsea at the death; Why there’s more to Saracens than money 07:51
Novak Djokovic swats aside Ito to reach Australian Open third round 07:20
Seán Moran: More trouble as GAA votes one way and acts in another 07:00
Rowe and Dublin ready to get back down to business 06:00
Gordon D’Arcy: There’s more to Saracens’ success than money 06:00