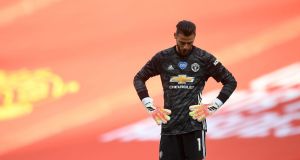 Amid the chaos of Spain’s World Cup in 2018, perhaps the greatest casualty was David de Gea. The days when his heroics repeatedly papered over the cracks at Manchester United feel a long time ago. It can be debated whether De Gea was at fault for the first and third goals, but he was clearly to blame for the second and, in those two moments, United’s long unbeaten run disappeared, and Chelsea’s passage to the FA Cup final was secured.

Frank Lampard had left out Kepa Arrizabalaga for his Cup goalkeeper Willy Caballero, although given no goalkeeper has conceded a higher proportion of the shots on target he’s faced since Opta began collecting the data, he may have done so with a sense of relief. Ole Gunnar Solskjær will perhaps wish he had done something similar. Although he made a number of changes to a putative first-choice lineup, both a reflection of the fact his side had played Crystal Palace on Thursday and an indication that Champions League qualification remains the priority, he preferred De Gea to Sergio Romero, who had played in the four previous rounds.

Quite what happened in Russia will perhaps never be known, but the De Gea who came back from the World Cup two years ago was not the same goalkeeper who went. It’s easy to come up with theories, very hard to know just what can have caused such a deflation. The sight of De Gea’s long, sad face, made even more mournful by his preacher’s beard, ruing another error as he slaps the turf has become grimly familiar.

Perhaps it’s as simple as the fact that at United he was playing behind a defence that tended to sit deep whereas Spain needed him to sweep up behind a high line. That is not his natural game – even if he is a good passer of the ball. His pass success rate of 74 per cent in the Premier League this season is not merely higher than most goalkeepers’ (only Kasper Schmeichel’s is better) but also than players of such quality as Raúl Jiménez, Pierre-Emerick Aubameyang and Harry Kane.

Rather it’s the positional sense and, perhaps, as Pep Guardiola highlighted with Joe Hart, the capacity to shift the ball quickly that eludes him. Thrust into a high-pressure situation, asked to fulfil a role with which he was not entirely comfortable, with a last-minute change of manager, it’s as though De Gea suffered a complete disintegration of his self-belief, something manifested in the Cristiano Ronaldo shot that slithered under him in Spain’s first game.

Or perhaps it’s that without the carrot of a possible move to Real Madrid, De Gea’s focus has slipped a little. Perhaps there’s a physical issue, although he is only 29. But whatever the reason, De Gea has gone from being arguably the best goalkeeper in the league, a beacon of reliability who was capable, as in that fabled game at the Emirates in December 2017 when he made 14 saves, of denying an opponent almost single-handed, to being somebody from whom mistakes are no longer a surprise, somebody who is in danger of becoming a liability.

Not that De Gea was the only issue with United. The change in formation (admittedly to the 3-4-1-2 that so troubled Chelsea in the league at Stamford Bridge in February) and personnel will be blamed for United’s disjointedness, but they had been scratchy against both Southampton and Palace last week. It may be nothing more complicated than fatigue.

However, the fact remains that Chelsea would not have won so comfortably, and may not have won at all, had it not been for De Gea’s error. Twice he was beaten by near-post touches on crosses. Neither was easy to save, and the second was unexpected given it came off Harry Maguire, but they’re the sort of reflex block at which De Gea used to specialise. The first particularly, as it spun in off De Gea’s shin, seemed almost a physical representation of his diminished status, as though his leg would somehow have had greater magnitude in previous seasons and made sufficient contact to kick the ball to safety rather than merely slowing its progress over the line.

The second goal was a howler at any level, a straight, low, Mason Mount shot of no great velocity that crept through De Gea’s arms. That’s the image that will stay in the mind, and perhaps make Solskjær ponder a change. Is De Gea’s form gone for good? And does his preference for a low block fit the sort of football the manager envisages his side playing in the future? – Guardian