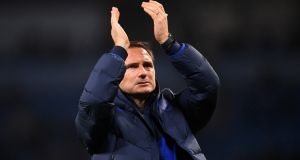 CAS have announced Chelsea’s transfer ban has been halved from one window to two, allowing them to sign players in January. Photograph: Laurence Griffiths/Getty

Chelsea’s transfer ban has been lifted, freeing up boss Frank Lampard to make signings in the January window.

The Court of Arbitration for Sport (CAS) has halved Chelsea’s two-window Fifatransfer ban and their financial sanction, after the west London club’s appeal.

The Blues were hit with the Fifa transfer embargo last season on issues relating to the signing of overseas youth players.

“The sole arbitrator found that CFC did violate Articles 19.1 (related to the international transfer of minors) and 19.3 (related to the first registration of minors), but for a significantly smaller number of players (about one third of the violations found by Fifa),” read a CAS statement.

“In addition, the violations of other RSTP rules were found to be less serious than those attributed to Chelsea FC by Fifa.

“Accordingly, the Sole Arbitrator reduced the sanction to one single transfer ban (which Chelsea FC already served during the 2019 summer registration period), and halved the monetary sanction.”

Chelsea will now be able to sign front line recruits in January, with a new left-back a priority for manager Lampard.

The Blues can also look at a replacement for Eden Hazard, who left for Real Madrid in the summer on a deal that could rise as high as £150million.

Chelsea were hit with the initial transfer ban in April after it was alleged Bertrand Traore had played for the club for several years before being registered in 2014.

But now while CAS has partially upheld the Fifa ruling, the Blues are at least free to bring in new recruits next month.

Swiss-based CAS confirmed it had “modified” Fifa’s sanctions following Chelsea’s appeal, halving the length of the transfer ban and also cutting the club’s fine in two.

The CAS statement read: “The following sanctions have now been imposed by the CAS: Chelsea is banned from registering any new players, either nationally or internationally for one entire registration period, which the club already served during the 2019 summer registration period.

“Chelsea is ordered to pay a fine to Fifa of the amount of 300,000 Swiss Francs.

“The warning and the reprimand are confirmed.”