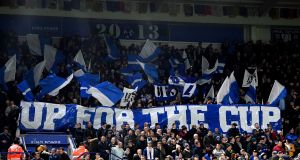 It was, on the face of it, classic haplessness of the English Football Association to have used the FA Cup third round as a stage for its “take a minute” campaign for mental health, while a clutch of matches were streamed live exclusively on betting sites, a looming risk to financial and mental health. Packaged up by the marketing giant IMG, which bought the TV and media rights to football’s grand old competition from the FA, the deals offer yet another pathway for supporters to inextricably associate the game itself with betting,

Charles Ritchie, whose son Jack killed himself in 2017 after becoming addicted to betting, described the arrangement as “shameful”, a targeting of football supporters which could for some be their route into addiction, and ultimately suicide. A core argument for Ritchie of the Gambling with Lives Campaign he founded with other bereaved families is that betting needs to be treated as a public health risk, and the deluge of offers, marketing and methods tested and regulated accordingly.

Politicians, including the ennobled new British minister for culture, media and sport, Nicky Morgan, queued up to criticise the deal as unethical and unacceptable, and called on the FA to reconsider it. The outcry was painful for the FA because of the well-meaning intentions behind its “take a minute” message, and because it has in fact been one of the few football bodies to take some kind of ethical stance on gambling sponsorship.

While clubs, their shirts, grounds and the English Football League (EFL) itself – sponsored by SkyBet – have become drenched in gambling company advertising, the FA in May 2017 did end its partnership with Ladbrokes and decided to have no further sponsorships by betting companies.

By then, the FA Cup deal with IMG had already been done for six seasons from 2018 to 2024, and IMG had sold the rights on to seven betting companies in the Britain and more around the world. The FA explained that it would be much more complex and potentially costly to try and unravel all of those, than to undo a single direct deal with Ladbrokes. The clear implication of the FA saying it will “review” the betting element of the deals when they are renewed from 2024-25, is that they will come to an end.

So the FA has sustained a storm of criticism although its chairman, Greg Clarke, has been a rare football King Canute, waving back the overwhelming tide which has washed over the game since the Labour government fatefully deregulated gambling in 2005.

Football supporters, including young people growing into their love of the game and its heritage, now have “gamblification” interwoven with it. The heavy restrictions of the past, the frosted windows of bookmakers’ shops, introduced in response to the clearly recognised dangers of gambling, have been waved away for a culture in which betting is up front, online and in your face.

The EFL makes the case that its sponsorship arrangement is responsible and mutually beneficial, but it can still feel shocking that it has SkyBet alongside the actual names of the divisions in the world’s oldest league. SkyBet has the right to show 16 Championship matches a season on its website, and international betting sites also stream matches, but the EFL clarified that this is not exclusive; all such matches are also broadcast on television or streamed by the clubs.

The Premier League has no such arrangement as part of its multi billion pound media rights sales, but for years, many of its clubs have paraded betting sites on their shirts and billboards in the grounds, and taken money from official betting “partners”. At times, with betting adverts colonising matches, and broadcasters’ coverage itself sponsored by gambling companies, the booming English game can seem like just a platform to promote and facilitate gambling, here and around the world.

The FA could perhaps be forgiven for feeling a little resentful of politicians seizing this issue, FA Cup matches not picked by broadcasters streamed on Bet365 and other betting sites, as a high horse to leap on. Governments are responsible for this spectacularly changed landscape, having deregulated just as the technology changed to supercharge gambling.

Tracey Crouch honourably resigned from her position as sports minister when the government was sliding away from a recommendation to limit stakes on highly addictive fixed odds slot machines to £2, but otherwise action to address Britain’s gambling problems is alarmingly slow. Politicians, including the new minister Morgan, are clearly concerned enough to have a wallop at the FA, but the power to genuinely make a difference lies with them. – Guardian