Early round-up: League One side hold Toon at Spotland, Hendrick on target for Burnley 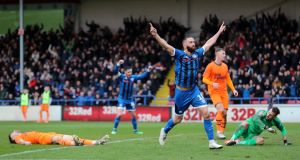 Forty-year-old Aaron Wilbraham struck late to snatch a richly-deserved draw for League One Rochdale in their FA Cup third round clash with Newcastle at the Crown Oil Arena.

Wilbraham combined with fellow substitute Luke Matheson, 23 years his junior, to equalise in the 79th minute after Miguel Almiron had put the Premier League side in front.

Steve Bruce had named his strongest possible Newcastle line-up and the Magpies ought to have been home and dry by half-time after a thoroughly dominant first 45 minutes.

But Brian Barry-Murphy’s men stormed out for the second half and Oliver Rathbone had three fantastic opportunities as the underdogs visibly grew in confidence before Wilbraham’s strike.

It could have been even better for Rochdale with Rathbone firing a glorious chance wide in the final minute as the visitors, remarkably, were left clinging on for an entirely unwanted replay.

Jay Rodriguez scored twice as Burnley responded to a poor run in the Premier League with a 4-2 victory over Peterborough in the third round of the FA Cup at a sparsely-attended Turf Moor.

The Clarets have lost their last three matches and League One promotion-chasers Peterborough would have fancied their chances against a team showing eight changes.

But Posh, who have not beaten a top-flight side in the FA Cup since 1965, have also had a poor festive period and they were three down inside 25 minutes through goals from Rodriguez, Erik Pieters and Jeff Hendrick.

Ivan Toney and Mo Eisa have scored 28 league goals between them this season and Toney seized on a defensive mistake to pull one back before half-time with his 17th of the campaign.

But Rodriguez’s second all but clinched the tie for Burnley even though teenage substitute Ricky Jade-Jones pulled one back for Posh late on.

Birmingham City scored at the death to progress to the FA Cup fourth round at the expense of fellow Championship side Blackburn Rovers.

The Blues took an early lead through Daniel Crowley but were reduced to 10-men on the hour mark, with Adam Armstrong equalising from the spot.

However, despite their man disadvantage Pep Clotet’s side struck at the death - Jérémie Bela’s 90th minute winner proving the difference.

Sky Bet Championship challengers Millwall eased into the FA Cup fourth round with a comfortable 3-0 win over League Two strugglers Newport at The Den.

There were 54 places between the two teams at kick-off, in their first meeting since 1985, and the Lions were the better side throughout, despite the visitors’ spirited start to the second half.

A first-half strike from Matt Smith put the hosts in charge and second-half goals from Connor Mahoney and Tom Bradshaw sealed the victory for Gary Rowett’s side.

A hat-trick from Tom Eaves ensured Hull reached the FA Cup fourth round with a 3-2 win against 10-man Rotherham.