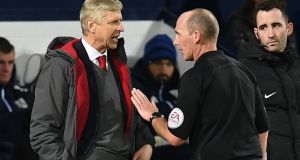 Arsenal manager Arsene Wenger has been charged following his conduct in the referee’s changing room after Sunday’s game against West Brom, the Football Association has announced.

Wenger was furious with referee Mike Dean, who had awarded West Brom a late penalty at the Hawthorns for a handball by Calum Chambers.

Jay Rodriguez converted the spot-kick to rescue a 1-1 draw for the Baggies after a James McClean own goal had earlier given Arsenal the lead.

Wenger has until 6pm on Friday to respond to the charge.

“It is alleged his language and/or behaviour in the match officials’ changing room after the game was abusive and/or improper and/or questioned the integrity of the match referee.”

Chambers was penalised after Kieran Gibbs pushed the ball onto the defender’s arm but Wenger felt his player’s action was not deliberate.

FA rules say a handball must be a “deliberate act” and dictates the distance between the opponent and ball should also be considered. Chambers was standing around two metres away from Gibbs.

“It was very disappointing,” Wenger said on Tuesday, before the FA’s charge had been made.

“What is more frustrating for me is it happened many times this season – at Stoke, Watford, Man City, now West Brom.

“It is a concerning coincidence for me. That is why as well I was not at all happy with the movement the referee made as to why he gave the penalty. It did not correspond at all with what happened.

“On that front it’s a bit worrying. He saw what he wanted to see.”