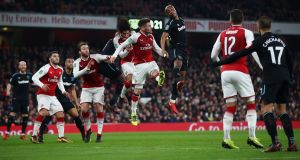 Three weeks ago, before Arsenal lost to Manchester United, Arsène Wenger suggested playing a back three had helped his side combat the counterattack which, of all their many weaknesses over the past decade, has probably been their biggest.

It was a claim that prodded interest at the time and has become more intriguing only in the days since. The truth of it will be severely tested on Friday as Arsenal face Liverpool, who at the moment are one of the most dangerous counterattacking sides in the world.

If, that is, Arsenal play a back three – which may depend on the fitness of Shkodran Mustafi. When he was forced off against United after the concession of the second goal, Arsenal switched to a back four and proceeded to dominate, before conceding on the counter. There, at least, was an exception to prove the rule; in the familiar 4-2-3-1, Arsenal were still vulnerable to counterattacks.

The two goals they had conceded early in the game had been the result of needlessly conceding possession followed by a rapid transition, which is not quite the same thing – at least not the classic way of conceding on the counter to which Wenger had presumably been referring. If you give the ball away in your own half when the majority of the team are heading the other way, it doesn’t really matter what formation you play.

The back four remained for the Europa League game against Bate, when Arsenal, with a much-changed lineup, won 6-0. The 3-4-2-1 was back for the game against Southampton. Again, Arsenal fell behind early after giving the ball away cheaply. This time Wenger waited until the 64th minute before switching to a back four; again his side dominated, and this time they found a late equaliser.

In the three games since, they have started with a back four. They haven’t conceded but have scored only twice, drawing at West Ham and beating Newcastle in the league before beating West Ham in the Carabao Cup. In none of those games have they played with anything like the rhythm they managed in their best periods against United and Southampton, but on the other hand neither have they given the ball away stupidly in dangerous areas.

The messages are confusing. Around the United match, Wenger seemed to be hinting that the back three was for everyday use, but that the 4-2-3-1 had a function for chasing games – or perhaps for meetings with sides he expected not to pose much of a threat on the break. Yet if anything, in the games when the 4-2-3-1 has been used from the start, the result seems to have been a loss of fluency.

Not, of course that such matters are just to do with formation. Jack Wilshere played perfectly well against West Ham and Newcastle, but perhaps the absence of Aaron Ramsey and the break-up of his partnership with Granit Xhaka has created a slight imbalance in midfield. And a strength of David Moyes and Rafa Benítez over the years has been their capacity to take any work of art and turn it into something less palatable.

Those two names highlight another aspect of Wenger’s comment, which is how odd they would have sounded 13 years ago when Benítez arrived at Liverpool, with Moyes about to lead Everton to finish above Liverpool. Back then, Wenger did not worry about counterattacking because he was the king of the counter. The Invincibles team were at their most thrilling and most dangerous when Thierry Henry, Robert Pirès and Fredrik Ljungberg were surging forward on the break. Other teams worried about being countered upon by Arsenal who, thanks to the barrier Patrick Vieira and Gilberto Silva provided at the back of midfield, could absorb pressure. Arsenal had grace, but they also had power and acceleration.

Their decline since reaching the Champions League final in 2006 is in part a financial issue, Arsenal’s inability, particularly as they moved stadium, to cope with the new era inaugurated by Roman Abramovich’s arrival at Chelsea. But it’s also a result of Wenger’s decision to abandon the old ways and start collecting diminutive creators. It’s as though a master falconer had suddenly started breeding canaries.

Matters that never used to be an issue – smaller birds eating the seeds, rabbits running amok in the fields, other teams scoring on the counter – now demand an answer and there’s a good argument Wenger has been slow to react.

But still, the point remains that if Wenger now believes a back three is the way to counter the counter, that is how he has to play on Friday. Arsenal have been devastated by Liverpool’s pace too often in the recent past – at Anfield in August, home and away last season – for that not to be the biggest concern. If Mustafi isn’t ready and if that means deploying Per Mertesacker or Rob Holding, so be it. Against Liverpool, countering the counter overrides all else.