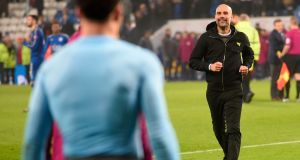 Pep Guardiola celebrated Manchester City’s penalty shootout victory over Leicester City to secure a place in the semi-finals of the Carabao Cup and extend their unbeaten domestic run to 27 matches, but the Catalan categorically ruled out any possibility that his squad could pull off an unprecedented quadruple.

Although the City manager was full of praise for his players and singled out the contribution of Claudio Bravo, who saved Riyad Mahrez’s penalty after Jamie Vardy had also missed from the spot, he refused to entertain any suggestion that his team could win the Carabao Cup, FA Cup, Premier League and Champions League in the same season.

“That is not going to happen. Of course not,” he said. “Come on, that isn’t real. What we’re living isn’t real. The situation of winning 16 or 17 games in a row in the league and qualifying for the Champions League before we finished the group stage and now we’re here playing with a lot of young players, that is not normal.

City appeared to have the quarter-final sewn up in normal time only for Bobby Madley, the referee, to award Leicester a controversial penalty in the 97th minute, when he penalised Kyle Walker for a foul on Demarai Gray, who seemed to go to ground rather easily. Walker was later booked for diving and Ilkay Gündogan also received a yellow card for simulation.

Guardiola, who had fielded a much-changed City team, was clearly upset at the time of the penalty, but afterwards he preferred to reflect on the way his players responded. “What is important is how we reacted. Whether it was a penalty or not, the referee is there and the TV is there, so the important thing is how we reacted. We could have gone down because it was the last minute and it was tough, especially with a lot of young players.”

In a strange incident in the second half, a fan tried to confront Guardiola in his technical area only for stewards to intervene and prevent the supporter, who lost his footing, from making contact with the City manager. “I think he wanted my shirt,” said the City manager. “I was safe. Maybe next time he needs to wear better shoes.”