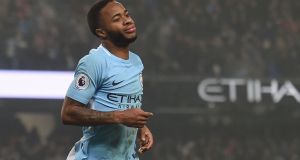 Police in Britain are investigating an incident of alleged racially aggravated assault on Manchester City’s Raheem Sterling at the weekend.

The Telegraph claims the forward was allegedly kicked and racially abused as he arrived at City’s Etihad Campus on Saturday morning ahead of their 4-1 victory over Tottenham, when Sterling scored twice.

Though City have not commented on the matter and a formal complaint is yet to be registered, Greater Manchester Police confirmed they are treating it as “a hate crime”.

A police spokesman said: “On Sunday, 17th December, 2017, police were made aware that a 23-year-old man had been subject to a racially aggravated assault on Clayton Lane on Saturday, 16th December.

“While an official report has not yet been made, inquiries will be carried out and officers are treating it as a hate crime. Hate crime will not be tolerated in Greater Manchester . . .,” he said.

Kick It Out, football’s equality body, said it had been in touch with Sterling to offer him support. The organisation said in a statement: “Kick It Out was alerted to the racist attack on Manchester City player Raheem Sterling, which occurred prior to their Premier League fixture against Tottenham Hotspur, on Saturday evening.

“Since this time, the organisation has been in contact with Manchester City to offer its support to Raheem and the club.

“Verbal and physical assaults of a racist or discriminatory manner are completely unacceptable across football and society.

“This incident is a racially aggravated hate crime and should not go unchallenged, through reporting to the relevant authorities, otherwise these incidents will encourage others that this behaviour is acceptable.”