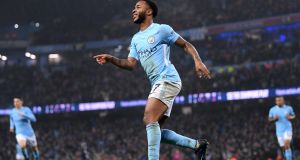 Raheem Sterling was ’cpmpletely shocked’ after he was racially abused and assaulted outside Manchester City’s training ground. A 29-year-old Manchester United fan was jailed for 16 weeks for the offences. Photograph: Laurence Griffiths/Getty Images

England star Raheem Sterling was “completely shocked” when he was racially abused and assaulted outside Manchester City’s training ground, a court has heard.

Karl Anderson, 29, smiled as he was jailed for 16 weeks after he pleaded guilty to racially aggravated common assault on the City player at Manchester and Salford Magistrates’ Court on Wednesday.

The court heard that he kicked and shouted racial abuse at the 23-year-old midfielder outside City’s training ground in Clayton Lane, Manchester, ahead of the Premier League game against Tottenham on Saturday.

Carl Miles, prosecuting, said Sterling described himself as “completely shocked” by the incident.

In a statement, the footballer said: “I didn’t think this type of behaviour still happened in this country in this day and age.”

Magistrates were told Manchester United supporter Anderson, who has a history of football-related violence, pulled his white van alongside Sterling’s car as the midfielder waited to enter the training ground.

CCTV showed both men got out of their vehicles and Anderson walked towards Sterling.

Miles said Anderson, who had been in the vehicle with his partner, began shouting racial abuse at Sterling and called him “you black Scouse c***”.

He said Anderson also told the footballer: “I hope your mother and child wake up dead in the morning, you n*****.”

Miles said: “He approaches Mr Sterling and can be seen to be bouncing on the balls of his feet.

“He sets out kicking Mr Sterling to the legs on four occasions.”

The court heard Sterling’s left hamstring was sore after the attack but he did not suffer serious injury.

Miles said: “He is a professional footballer. His legs are important for his job.”

Sentencing, chairman of the bench Diana Webb-Hobson told Anderson: “This was an entirely unprovoked attack. You stopped your car and you got out.

“The personal statement was very moving, we find injury was sustained.

“Your previous record was appalling, you don’t seem to learn anything, do you?”

The court heard Anderson had 25 previous convictions for 37 offences, including throwing a flare at a police officer during a football match.

In January, he was one of 12 Manchester United fans handed a football banning order after violent disorder ahead of an FA Cup fixture with Sheffield United.

Miles said: “He is now finding alternative ways to express violence and aggression, all relating to football.”

John Black, defending, said Anderson, of Woodward Street in Ancoats, Manchester, had lost his temper with Sterling after his girlfriend asked him to request an autograph.

The lawyer added: “He apologises through me to Mr Sterling for his actions.”

He said the defendant could not explain his behaviour and “bitterly” regretted it.

The defendant, who wore a black T-shirt, was supported in the gallery by two male family members.