FA to take no action over tunnel brawl at Old Trafford 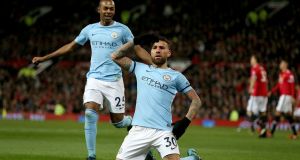 No action will be taken against Manchester United or Manchester City for the altercation that took place after City’s 2-1 Premier League win at Old Trafford earlier this month.

The visitors’ celebrations after the December 10th contest are alleged to have sparked a row involving several players and staff from both teams in the corridor outside the dressing rooms.

During that altercation, it is understood that milk and water were thrown at United boss Jose Mourinho from within the City dressing room.

But in a statement, the Football Association said: “Following a review of the evidence provided by the clubs and independent eyewitnesses, the FA will be taking no formal action.”

The two clubs were originally given 48 hours by the FA to provide their “observations” on what happened but that was extended to five days, with a deadline of 6pm last Friday.

With no obvious culprits, video footage of the incident or police interest in the matter, it was always unlikely that the FA would be able to shed much light on what happened.

But the altercation, which is understood to have been sparked by Mourinho taking exception to the loud music and high spirits in the away dressingroom, has provided a new chapter in the clubs’ mutual history.

When asked about it last week, Mourinho snapped at reporters and said the incident, which left City coach Mikel Arteta with a cut face, revealed the difference between his players and rival boss Pep Guardiola’s.

“The only thing I can say is that for me it was just a question of diversity – diversity in behaviours, diversity in education. Just that and nothing more than that,” he said.

Guardiola, however, has been adamant that his players, who lead United in the Premier League by 11 points, did nothing wrong and denied they lack respect for their rivals.

“Our intentions were to celebrate, inside the locker room, our happiness because we were happy. If the people cannot understand that then I’m sorry,” he said.

“We were so happy, we won a derby. If in that way we offended United – not just one player, not [just] Jose – then I apologise.

“We have huge respect for our opponents – not just Manchester United, all the opponents.”