Oxlade-Chamberlain hopes to start against former club at Emirates 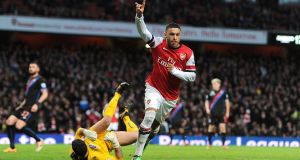 Alex Oxlade-Chamberlain during his Arsenal days. He wanted a fresh start at Liverpool, and the opportunity to carve a niche for himself as a midfielder. Photograph: Adam Davy/PA Wire

Arsène Wenger has questioned whether Alex Oxlade-Chamberlain is any more certain of a starting place at Liverpool than he was at Arsenal as he reflected on the midfielder’s £35 million summer deadline day move to Anfield.

Oxlade-Chamberlain hopes to face his former club at the Emirates Stadium on Friday night, although it is difficult to say with certainty if he will be in Jürgen Klopp’s lineup. Since his arrival at Liverpool the 24-year-old has started five of 15 Premier League games and one of four in the Champions League.

Oxlade-Chamberlain had grown frustrated at being unable to command a regular place at Arsenal, and also being played by Wenger in a variety of different positions. He wanted a fresh start at Liverpool, and the opportunity to carve a niche for himself as a midfielder.

Wenger was asked about Oxlade-Chamberlain’s stop-start Arsenal career; he made almost as many appearances as a substitute in the league as he did in the starting XI. Did Wenger accept that Oxlade-Chamberlain was never sure of his place?

“Is he sure of a place there [at Liverpool]?” Wenger said, pointedly. “No? That’s the answer. You are sure of a place nowhere. In a big club you have big competition for every single place. That is absolutely normal.

“What do you want? To be a big player and not have to fight? What do you want on top of that – sitting in your rocking chair and saying: ‘I’m a big player? I don’t need to fight?’ No. It doesn’t work like that. Every player can do that and Chamberlain does it. I am convinced it’s part of being a top player.”

Wenger did not want to lose Oxlade-Chamberlain, and he offered him a new contract to replace the one that had been set to expire in the summer of next year. However, the manager’s hand was forced in part by the club’s determination to keep Alexis Sánchez and Mesut Özil – the other key players who had one year to run. All three had made it plain that they would not re-sign at Arsenal, and the club were never going to risk losing all of them as free agents.

“At the end of the day I decided to sell one,” Wenger said. “Chamberlain made his decision and we had to find a compromise to get the best possible transfer out of it. I personally think he will be an important player for England and that he will continue to develop.”

At the time of Oxlade-Chamberlain’s departure his Arsenal teammate Aaron Ramsey tweeted that he was sorry to see him go. “Another of our British boys heading on to new things,” Ramsey added. The day before, Kieran Gibbs had moved to West Bromwich Albion, while Carl Jenkinson was loaned to Birmingham City.

There was a time when Wenger considered Oxlade-Chamberlain, Ramsey, Gibbs and Jenkinson, together with Jack Wilshere, to be a British core upon which to build the squad. That has not happened, but he was keen to highlight how he was still committed to homegrown talent. In Arsenal’s previous two league matches – the 0-0 draw at West Ham United and the 1-0 home win over Newcastle United – Wenger started with three academy products: Wilshere, Ainsley Maitland-Niles and Alex Iwobi, plus Héctor Bellerín, who joined the club at 16.

“You look at the other teams at the top and you tell me who has played with four players who have been educated in the academy,” Wenger said. “We do that every time we can. It remains the basis of our philosophy. I agree it hasn’t always come off as well as I would have liked. But if you look at the last 20 years, we are still one of the teams that have put out more young homegrown players than anybody else.” – Guardian