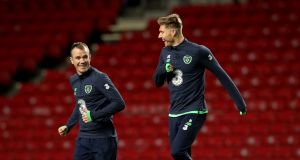 Glenn Whelan and Jeff Hendrick training with the Republic of Ireland squad at Parken stadium in Copenhagen on Friday. Photograph: Ryan Byrne/Inpho

Traditionally associated with fairytales, Copenhagen might be better known these days as a setting for Nordic noir television series. But those settling down in front of their TVs with the kids on Saturday evening will have to make a leap of faith. It will be just after the watershed before we find out just which of the two genres Ireland’s World Cup play-off at the Parken stadium actually falls into.

Martin O’Neill declined to make his prediction at his pre-match press conference on Friday, but the 65-year-old is adamant that he and his players have done more than enough in their four years together to suggest they can provide another happy ending.

An away win would bring Ireland closer to that happy ending, but O’Neill would surely settle for a goal or two and a draw. His opposite number, Age Hareide, certainly conceded that that would be a bad result for the home side on this occasion.

Quite how the Derry man might look to engineer even that level of upset will not be clear until the game is under way. But it is bound to involve much the same mix of elements that the Irish produced a month ago in Cardiff, where their physicality in midfield and resilience in defence asked questions of an ostensibly superior Wales side to which Chris Coleman’s men simply did not possess the answers.

Whether they can impose themselves to the same extent in Copenhagen remains to be seen, but on Friday O’Neill seemed like a man who is happy to give it a go. First up, he must pick the team to do it, and though he is not spoilt for choice in the absence of some important players, he has big decisions to make in midfield. Glenn Whelan may well return and attack where Shane Long, given Daryl Murphy’s efforts last time, might just not.

After that, there is the minor matter of getting Ireland sufficiently on the front foot that they might pose some sort of threat to Kasper Schmeichel’s goal; digging in and hanging on being most obvious alternative. Against a Danish midfield built around the apparently boundless energy and enterprise of Christian Eriksen, though, there seems likely to be a bit of that regardless.

“Historically speaking, the Republic of Ireland, even with some of the great players that have played in the past, have not been great goalscorers,” said O’Neill. “That doesn’t mean we can’t score out here, though. We can. We’ve got the capability of doing it. The away goal is obviously important and it’s something we think we’re capable of doing. We’re just going to go for it; that doesn’t mean gung ho or whatever the case may be. But we need to get on the front foot at some stage.

“Against Wales in the opening 15 minutes of the game we were on the back foot, naturally, because they’re playing at home and we’ve had to defend strongly just to get a foothold in the game. We started to do that and then the game levelled out. Then we scored the goal. And, of course, we had to defend strongly in the last 25 minutes. Which we did.

“We’ve had tough games away from home in this competition, starting against Serbia going right through. We’ve remained unbeaten away from home which is no mean feat. That’s a testament to the sort of character that’s in the team. But this is a different test again. And one that we have to be up for.”

O’Neill didn’t try to claim for a moment that his players have cornered the market in passion or determination ahead of their hosts. But he seemed entirely relaxed at the scale of the challenge at the Parken, where the roof will be open, and projected a certain confidence that, once again, when it matters, his players can deliver.

His opposite number, Age Hareide, it must be said, scarcely comes across as overawed. O’Neill’s old friend talked about Ireland being “easy to read but hard to beat” with, you sensed, no offence intended. The former defender shrugged off the suggestion that the rough and tumble of the visitors’ game might unsettle the home side.

If his team’s better group games are anything to go by, then Hareide has a fairly decent gameplan of his own. The width produced by the full-backs is of critical importance to the Danish approach, and though they have lost two defenders to injury, they are still certain to have the greater strength in depth.

O’Neill’s own talent, though, has been to ensure that, despite the limited resources, on their very biggest nights, his Ireland team somehow amounts to that little bit more than the sum of its parts.

And the nights don’t come much bigger than this. Ireland will have to excel again if Copenhagen is to tee us up for a fairytale ending.

1 Saracens to accept second 35-point deduction and effective relegation
2 How do Klopp’s Liverpool measure up against greats of past?
3 The Offload: Devin Toner opens up on Rugby World Cup snub
4 Player participation key to new GAA Play and Stay initiative
Real news has value SUBSCRIBE
Crossword Get access to over 6,000 interactive crosswords