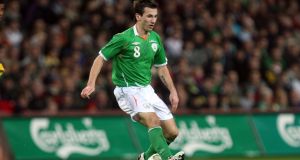 In action for the Republic of Ireland in 2008; Liam Miller. Photograph: Donall Farmer/Inpho

Former Ireland, Celtic and Manchester United midfielder Liam Miller is battling cancer, according to his friends and ex-teammates on social media.

Miller, who has been playing in the American third-tier United Soccer League for Wilmington Hammerheads, first made his name in Martin O’Neill’s Celtic team in 2004. His promising form there earned him a transfer to Manchester United, before spells at Leeds, Sunderland, QPR, Hibernian, Cork City and in Australia.

He also has 21 senior international caps, and one goal, for the Republic of Ireland.

The Cork native, now 36, is reportedly flying back to Ireland on Monday, where he will begin chemotherapy after undergoing initial treatment in the US.

It is understood that he is fighting pancreatic cancer.

His former teammate at Hibernian, Tam McManus wrote on Twitter; “Awful news about Liam Miller keep the fingers crossed that he somehow pulls through.

“Was in the USA for treatment this month and flys back tomorrow to start chemo here .

“He starts chemo tomorrow and is fighting hard really can’t go into any more detail than that out of respect for him and family. Praying he can get better.”

Wigan Athletic striker Noel Hunt wrote; “Such sad news about my old Room mate Liam Miller, Pray to God he pulls through this battle with Cancer, my thoughts and prayers are with him and his family.”

Another former Irish international, and Miller’s old teammate at Celtic, Darren O’Dea added; “All my thoughts and love with Liam Miller and his family.”

Retired Irish defender Ian Harte also tweeted: “Very sad news about one of my old teammates Liam Miller, thinking of him and his family at this very difficult time.”

While Danny Higginbotham who played with Miller at Sunderland wrote; “If true very sad news about one of my former teammates Liam Miller. Thoughts with him and his family at this very difficult time.”

Former Celtic and Wales striker John Hartson, who himself in 2009 successfully fought off testicular cancer that had spread to his brain, added; “My thoughts are with Liam Miller and his family this morning. Hope he can get through this difficult time of his life.”