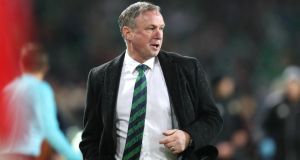 The Scottish Football Association has requested talks with Michael O’Neill and Sunderland are also interested. It remains a long shot for now that the man who oversaw Northern Ireland’s run to Euro 2016 and a World Cup play-off would take the job at the Stadium of Light.

The USA are also understood to want to speak to O’Neill about taking charge of their international side – a highly lucrative post. O’Neill’s brother is based in Chicago.

With Scotland seeking a successor to Gordon Strachan, the country’s governing body made initial contact with the Irish FA on Tuesday and is awaiting an answer on whether it can talk to O’Neill.

The 48-year-old has always been Scotland’s favoured candidate – with Aberdeen’s Derek McInnes also highly regarded – but the matter was complicated by Northern Ireland’s World Cup qualifying progress. O’Neill is also under contract until 2020. Although there is no set compensation figure should he move to a different international post, another governing body would need to negotiate with the IFA relating to the value of a notice period.

The IFA, which is yet to comment, will take time to formally consider Scotland’s request, during which time it is set to piece together an enhanced contract package in an attempt to retain O’Neill, who earns £600,000 per year, plus qualification bonuses.

Although the Scottish FA is unlikely to offer a wage much higher than that – Strachan was paid £500,000 a year – it is likely to offer sizeable incentive to lead Scotland to a place in Euro 2020.

Sources close to O’Neill, who lives in Edinburgh, have stressed he will take time to consider what is a key career decision and have played down the notion he has his mind set on a switch to Scotland. Personal circumstances also dictate the man who managed Shamrock Rovers will not hold discussions with anybody before next week. The Scottish FA has been irked by the O’Neill approach becoming public, with that inevitably increasing pressure on the association to secure its man.

Martin Bain, the Sunderland chief executive, hopes the challenge of waking up one of English football’s doziest sleeping giants – the team are bottom of the Championship – and taking them back into the Premier League will appeal to O’Neill but wants to determine whether he has the appetite for the daily grind of club football. O’Neill will be aware McInnes turned down Sunderland in the summer, since which time their troubles intensified under Simon Grayson.

Should the move for O’Neill founder, Paul Heckingbottom could well end up as the sacked Grayson’s successor. Although Barnsley have not yet received an approach for Heckingbottom, they are expecting one. The 40-year-old, who rebuffed an offer from Nottingham Forest in the summer, is understood to be interested in moving to Sunderland, not least because he could expect to quadruple his salary to £400,000.

O’Neill would be more expensive but Sunderland – who have also interviewed the former Rangers manager Ally McCoist – are likely to pay if they feel the Northern Ireland manager really wants the job. He would, however, have to do so without a huge transfer budget; significantly, the club’s financial restraints are thought to have put Aitor Karanka, the former Middlesbrough manager, off the vacancy. Ideally, Bain would like a manager in place in time for Saturday’s home game against Millwall but is prepared to take his time in order to secure the right one.

Chris Martin steals a point for resurgent Derby against Forest 15:23
Brighton see off doomed Norwich to edge closer to survival 15:09
Eamon O’Shea: ‘We spent quite a bit of time talking about older people rather than to older people’ 08:00
The Best of Times: Ireland women’s hockey team’s World Cup fairytale 07:00
Michael Walker: Ian Baraclough staying on trend, from Sligo to Windsor Park 06:00

1 Eamon O’Shea: ‘We spent quite a bit of time talking about older people rather than to older people’
2 Monica Seles: The warrior queen who could have been the best ever
3 Matt Williams: Six Nations must recognise the desire for revolution outside Europe
4 Aidan O’Brien targets historic eighth Epsom Derby win with strong hand
5 Sport crosses its fingers yet again as ministerial merry-go-round gets another spin
Real news has value SUBSCRIBE
Crossword Get access to over 6,000 interactive crosswords