Instagram post: ‘Whatever you say about the first goal, its a foul. The second goal is offside’ 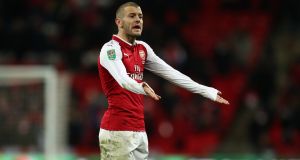 Jack Wilshere “can’t accept some of the decisions” that went against Arsenal in their Carabao Cup final defeat to Manchester City.

Arsenal came in for heavy criticism for their performance at Wembley as they were swatted aside 3-0 by the Premier League leaders, who lifted their first trophy under manager Pep Guardiola.

But Wilshere, while admitting City deserved their victory, felt the Gunners were hard done to by some of referee Craig Pawson’s decisions.

Arsenal defender Shkodran Mustafi claimed he was fouled by Sergio Aguero seconds before the Argentinian opened the scoring, while Leroy Sane was stood in an offside position but deemed to be not interfering with play as Vincent Kompany added a second.

Wilshere also claimed City midfielder Fernandinho should have been sent off during the contest.

The England midfielder wrote on Instagram: “Hard to put into words my emotions about yesterday. City are a good team and deserved to win yesterday.

“Alot of people have had thier say on us and we have to accept cristism when we lose. That being said i can’t accept some of the decisions that went against us yesterday.

“Whatever you say about the first goal, its a foul. The second goal is offside. There should have been a second yellow in the first half.

“Yes this happens in football but its still hard to accept. And people will say we are looking for excuses but these are facts.

“Anyway we need to respond, starting on Thursday. Thanks to all the gooners for your support and trust me we feel the same but we need to stick together.”