Arsenal announce plans for 55 redundancies due to effect of coronavirus 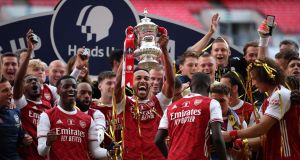 Arsenal’s victory in the FA Cup and subsequent qualification for the Europa League saw the first team squad’s pay cut reduced from 12.5 per cent to 7.5 per cent. Photograph: Adam Davy/AFP via Getty Images)

Arsenal have announced plans to make 55 redundancies after encountering financial difficulties because of the coronavirus pandemic.

A joint statement from the club’s managing director, Vinai Venkatesham, and their head of football, Raúl Sanllehí, argued the proposal to cut jobs was necessary as Arsenal, whose largest shareholder is the American businessman Stan Kroenke, have suffered severe drops in commercial and match day revenue.

It has been reported that the cuts will come from some football departments as well as in commercial and administrative roles, with Venkatesham and Sanllehí promising the cost-cutting measures will allow Arsenal to keep investing in their squad.

The club, who qualified for the Europa League after winning the FA Cup last weekend, are trying to convince Pierre-Emerick Aubameyang to sign a new contract and hope to sign Chelsea’s Willian on a three-year deal when his contract expires this month.

“Our main sources of income have all reduced significantly,” Venkatesem and Sanllehi said. “Revenue from broadcasters, match day and commercial activities have all been hit severely and these impacts will continue into at least the forthcoming 2020-21 season.

“We all hope there will be no ‘second wave’ but we also need to accept that is one of the many uncertainties ahead of us and plan accordingly. Over recent years we have consistently invested in additional staff to take the club forward but with the expected reduction of income in mind, it is now clear that we must reduce our costs further to ensure we are operating in a sustainable and responsible way, and to enable us to continue to invest in the team.

“Our aim has been to protect the jobs and base salaries of our people for as long as we possibly can. Unfortunately, we have now come to the point where we are proposing 55 redundancies. We do not make these proposals lightly and have looked at every aspect of the club and our expenditure before reaching this point. We are now entering the required 30-day consultation period on these proposals.

“We know this is upsetting and difficult for our dedicated staff and our focus is on managing this as sensitively as possible. These proposed changes are ultimately about ensuring we take this great football club forward, creating the right organisation for a post-Covid world, and ensuring we have the resources to return to competing effectively at the top of the game here and in Europe.”

In April Arsenal, who finished eighth in the Premier League, agreed a 12.5 per cent pay cut over the next 12 months with most of their men’s first-team squad and all the coaching staff. The cut is due to drop to 7.5 per cent as a result of the club qualifying for the Europa League. Arsenal’s wage bill in their most recently published accounts, for 2018-19, was £232m.

The club continued to pay staff in full during football’s lockdown instead of falling back on the government’s taxpayer-funded furlough scheme. The club’s 14 executives agreed to a one-third salary cut for the next year.