For Ciara Grant, getting back to playing ball is just what the doctor ordered 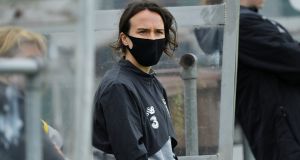 When she came off the pitch at the Brandywell last September having helped Strabane club Sion Swifts complete their league campaign with a thumping 13-0 win over Derry City, little did Ciara Grant know that she wouldn’t play a competitive game again for close enough to a year.

No wonder, then, that she’s relishing the prospect of starting the latest chapter in her football career with Shelbourne on Sunday when the National League finally gets under way. “I cannot wait,” she says, “this season has been a long time coming.”

As a doctor who returned home to her native Letterkenny to volunteer at the local hospital soon after the outbreak of Covid-19, Grant is better placed than most to put sport in perspective. But still, it has been such an integral part of her life since she was a child, it’s been the strangest of times being without it.

“I had a ball in my hands from probably the moment I could walk,” she says, soccer, Gaelic football and basketball her primary sporting passions. She came by her talents honestly too, her father Seán, she says, “was a very good soccer player, he had an underage cap for Northern Ireland – and he still claims he had trials at Liverpool. But none of us really knows if that’s true,” she laughs.

Until she moved to Dublin in 2011 to start her studies in UCD, she juggled all three sports, becoming a key member of the Donegal Gaelic football team, but she then put her focus on soccer.

She had represented Ireland at every underage level, winning over 60 caps, was named the FAI under-17 player of the year in 2009 before being a part of the team that reached the final of the Under-17 European Championships a year later and the quarter-finals of the Under-17 World Cup. She made her senior international debut in 2012, winning 14 caps in all, and with her studies now complete, her ambition is to add to that tally.

This year was to see the start of that effort after she signed for Shelbourne in January. Following a busy pre-season with her new team-mates she was all set to begin the 2020 campaign in March. And then . . . well, you know yourself.

“So, I’m on month 10 of my pre-season,” she laughs. “The league was postponed just a few days before it was to start, so we were annoyed and frustrated, having put in the hard work. But then reality kicked in. I’m a lecturer and tutor at the Royal College of Surgeons so I was tied to Drogheda hospital, but I asked for permission to go back to Letterkenny.”

“I knew when things were getting bad that the Donegal hospitals would be the last to get the extra staff, to get people willing to go up there, because the infrastructure and transport links are so bad. I suppose there was a sense of obligation. I’m a very proud Donegal woman, I love the place, so I wanted to do my bit.

“But it was frightening at the start. I’m not an anxious person, but for a few weeks all our information was coming out of Italy, we were hearing doctors’ and nurses’ personal stories, it was quite terrifying. It was always in my mind that we would have to prepare for what happened in Italy, but luckily our Government stepped in. That and other factors helped, like we’re quite spread out in this country, we don’t have a dense population.

“But it was strange for a while in the hospital because there was almost a month-long period when it was eerily quiet on the non-Covid side of things. Strokes and heart attacks were still happening but these people weren’t coming in. There was a big push then from the HSE to make that point clear to the public, that they still needed to come to hospital, we were there to help.”

On a personal level, Grant says she was acutely aware of the risks, not least for her family. “I was staying with my parents who have had their own health issues. I was pretty much self isolating at the back of the house, the downstairs toilet was just for my use. But we had a good routine. I could see how hard the lockdown was, though, for the people around me.

“One of the benefits of being a frontline worker was that you were getting out and meeting people, there was some level of normality to your life. Sometimes I would forget that until coming home and finding my family in isolation.”

The 27-year-old, who is on duty this week as the doctor for the Irish under-17 girls’ trials in Waterford, is now looking forward to playing football again after that lengthy ‘pre-season’, Cork City the opponents at Tolka Park on Sunday. In her only previous appearance at the ground, in 2011, she won the All-Ireland Schools title with Loreto Letterkenny.

In her four seasons with Raheny United, Grant just about won it all, including two league titles and two FAI Cups, before she switched to UCD Waves. She then took a break from soccer to allow her focus on the closing stages of her path to qualifying as a doctor, although she filled that sporting gap by returning to the Donegal fold. She was part of the team that won the Ulster title in 2018 and, in February of last year, beat Dublin in Croke Park in the National League.

She returned to soccer with Sion Swifts last season, when she was based for an earlier spell at Letterkenny Hospital, but now that work has taken her back to Dublin, she’s resuming her career south of the border.

“I came second last year with Sion to Linfield in the Northern Ireland league and Shels came second to Peamount United, so we both have the same kind of motivation to push on and go one better.”

“More than anything, it’s just brilliant to be back, we missed football so much. It’s different, of course, but it has to be. We’re getting our temperatures checked before every training session, we all have our own water bottles, we’re turning up for matches ready to go, we’re in our gear, there’s no use of changing rooms.

“We’ve been doing that for almost a month and we’ve had no issues at all. It’s just about maintaining those standards, not letting complacency seep in. We’ve come this far, we all just have to carry on playing our part.”