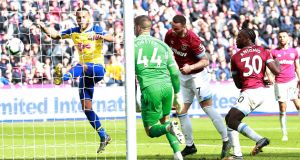 The Austrian, whose form had deserted him since a lucrative move to China failed to materialise during the transfer window, found the net twice to sink the Saints.

Ryan Fredericks hit the third as West Ham secured their biggest home win of the season in their final outing at the London Stadium.

The hosts were missing two of their most influential players, Declan Rice and Felipe Anderson, through illness, but it did not show as they raced into a 16th-minute lead through Arnautovic.

Yan Valery inexplicably gave the ball away with a loose pass to Mark Noble in the centre circle.

The Hammers skipper charged forward and played the perfect throughball to Arnautovic, who took a touch before drilling it past Fraser Forster.

It felt like a moment of redemption for the forward, who has on occasions been booed by the West Ham fans following his unseemly attempts to engineer a January move.

With Southampton having guaranteed their survival last week Forster was brought out of cold storage for a first appearance since Boxing Day 2017.

The former Celtic keeper got down well twice to keep out Michail Antonio efforts and also beat away a shot from Manuel Lanzini before half-time.

Saints boss Ralph Hasenhuttl sent on Nathan Redmond at the start of the second half to inject some life into their attack.

The winger met a corner at the far post but with plenty of the goal to aim at he blasted his shot straight at Antonio.

Shortly after Redmond’s volley forced Lukasz Fabianski into his only save of the afternoon.

Saints felt they should have had a penalty when Fredericks collided with Shane Long in the area but referee Stuart Attwell did not agree.

Forster saved from Lanzini at his near post but West Ham were beginning to exert more pressure, and it told in the 69th minute.

Forster could only palm Arthur Masuaku’s drilled cross into the body of Arnautovic, who snaffled a simple header as the ball looped into the air.

Three minutes later West Ham had their third, Fredericks combining with substitute Jack Wilshere to find an opening before firing beyond Forster for his first Premier League goal.

Arnautovic almost completed a hat-trick when he cut inside onto his right foot only to curl the ball agonisingly wide.

A Leander Dendoncker volley gave Wolverhampton Wanderers a 1-0 victory over Fulham at Molineux on Saturday to put them on the verge of a seventh placed finish in the Premier League.

The victory takes Wolves four points clear of Everton in eighth in the standings. If ninth placed Leicester City do not beat Manchester City on Monday night, the top-flight newcomers will be assured of their highest finish in the Premier League era.

Already-relegated Fulham came into the contest having won their last three games, and frustrated their opponents early on.

Dendoncker came closest to scoring in the first half, but saw his header came out off the crossbar.

Wolves improved after the break and Dendoncker’s cushioned volley broke the deadlock with 15 minutes remaining.

A brilliant save from Sergio Rico denied Diogo Jota a second, but Wolves saw out the victory to move a step closer to qualifying for next season’s Europa League.