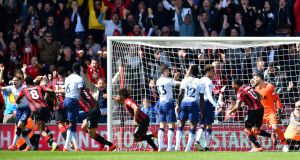 Tottenham’s Premier League top-four fate will go down to the final day after they suffered a late 1-0 defeat at Bournemouth having had two men sent off.

Spurs would have guaranteed Champions League football next season had they won on the south coast but red cards for Son Heung-min and Juan Foyth killed their chances of that as they fell to Nathan Ake’s late goal.

They looked like they were going to earn a valiant point in what would have been their first away draw of the season until Ake headed home an injury-time corner for the Cherries.

Son had earlier walked for pushing Jefferson Lerma and Foyth was sent off three minutes after coming on as a half-time substitute for a reckless tackle.

It means Spurs are likely to have to beat Everton in their final game next Sunday to be guaranteed a fourth successive year of Champions League football, unless Chelsea, Arsenal and Manchester United all lose this weekend.

It looked like rookie Bournemouth’s 19-year-old Irish goalkeeper Mark Travers was going to be the story of the game as he produced several fine saves on his Premier League debut, as Spurs should have had the game wrapped up before their indiscipline.

Mauricio Pochettino’s team selection made it clear that he was not wanting their top-four fate to go down to the final day and a strong side made a dominant start.

Lucas Moura nearly gave teenage goalkeeper Travers a Premier League debut to forget, but his shot from the halfway line flew just wide, while the Brazilian also headed over.

It soon turned into more of a dream debut for Travers as he single-handedly kept the Cherries in the game in the first half with a string of saves that shows exactly why he is thought so highly of.

First he denied Dele Alli’s powerful shot with a strong parried save, then produced a flying stop to turn Moura’s effort over.

His feet kept another Moura shot out before more acrobatics saw him tip an Alli header over the bar.

Either side of those saves, Son should have scored after he waltzed through the defence but he fired over.

Spurs were lucky to have 11 men on the pitch when Eric Dier, already booked, went through the back of Joshua King, but they did not get to the half-time whistle with a full complement of players as Son was dismissed in the 44th minute.

The South Korean reacted angrily to Jefferson Lerma trying to retrieve the ball and pushed his opponent over.

Referee Craig Pawson immediately brandished the red card and he had it out again just three minutes after the restart as Spurs’ afternoon got even worse.

Foyth, a half-time substitute, joined Son in the dressing room when he overran the ball and went through with a foot raised on Jack Simpson.

Bournemouth had plenty of the ball but they struggled to make their two-man advantage count as they rarely troubled Hugo Lloris.

Callum Wilson had a curling effort deflected and then glanced wide before their big chance came in the 79th minute when Lys headed straight at Lloris.

That did not prove too costly as in time added on Ake lost his marker and headed into the bottom corner.