Antonio Conte dismisses speculation about a return to Italy 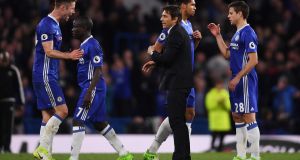 Antonio Conte has distanced himself from the latest wave of speculation linking him with a return to Italy in the summer, most probably with Internazionale, and stressed his aim was to claim the Premier League title with Chelsea and then “build something important” for the future at Stamford Bridge.

The Italian saw his side retain their seven-point lead at the top of the division with a hard-fought victory over Manchester City on Wednesday.

Chelsea may still need as many as six wins from their final eight games to reclaim the title, but the manner of their success in midweek was impressive given it came just days after the surprise home defeat by Crystal Palace.

Any nerves generated by that rare setback have been eased.

Arguably more disruptive might have been the constant suggestions back home, fuelled most recently by the Italian agent Federico Pastorello, a friend of Conte’s, that the manager’s spell in English football could prove short-lived.

Inter, under the money-flushed ownership of Suning Holdings group, are understood to be keen to test his resolve to remain in London and are prepared to offer him almost complete control of transfer policy at the San Siro.

Pastorello did little to stifle the notion his compatriot might be tempted, despite Chelsea remaining confident Conte will sign an extension to his contract, which runs to 2019, before the end of the season.

“Will Conte stay at Chelsea? If he wins a title and begins the cycle, the objective is one of continuity,” said the agent, who has become an increasingly prominent figure behind the scenes at Chelsea since last summer.

“But if offers from clubs arrive, new opportunities may arise, especially at historical clubs.”

Yet Conte, speaking to Italian media, expressed his frustration that the agent had been talking publicly on his behalf.

Asked whether that meant he will be at Chelsea next season, Conte added: “Yes, for the next season.”

Recruitment will become an issue this summer, with the Italian seeking proper influence on transfer policy as he prepares to add significantly to his squad before the team’s return to the Champions League.

Talks have been held with the influential director Marina Granovskaia, with Chelsea well aware of Conte’s preference to target players such as Arsenal’s Alexis Sanchez. The Chilean’s wage demands – effectively around £300,000 a week – could be met at Stamford Bridge, though compelling Arsenal to sell may prove more problematic.

The list is also understood to include Monaco’s Tiemoue Bakayoko, the Southampton centre-half Virgil van Dijk, and David Alaba and Alex Sandro of Bayern Munich and Juventus respectively. Romelu Lukaku is also a target, particularly should Diego Costa finally force a move back to Spain or to China.

Eden Hazard, Chelsea’s match-winner on Wednesday with a brace in the leaders’ victory, is also expected to sign new terms over the next few months. His compatriot Thibaut Courtois has urged the club to deflect apparent interest from Real Madrid in the playmaker.

“Chelsea have ambitions to win the Champions League again and always look to play for the title,” said the goalkeeper, who had also been linked with a move to the Bernabeu.

“If you want to do that, you need the biggest players. Eden is obviously a big part of that. Eden is not affected by the speculation. They are just rumours. He is just calm. He knows that he is important to Chelsea, like I do. We are both very happy to be here. The game against City was my 100th for Chelsea, and I hope to have many more.”