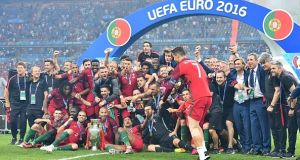 Uefa made €847 profit from Euro 2016, which was won by Portugal. Photograph: Mustafa Yalcin/Getty

Uefa made a net profit of €847 million on Europe 2016, the organisation’s latest financial results show, with the tournament generating total revenues of €1.92 billion, an increase of some €500 million on the 2012 tournament in Poland and Ukraine.

The organisers distributed €301 million to the 24 associations that participated in last summer’s finals with the FAI receiving €11 million, midway between its English and Northern Irish counterparts who got €11.5 million and €10.5 million respectively. Champions Portugal came out on top on the financial front too with the country’s federation taking €25.5 million home in prize money along with the trophy.

The accounts reveal the staggering growth in the revenue that football generates at European level with average annual income up more than 50 per cent in the last four years alone.

Years involving European Championships are always much higher because of the money the tournament brings in but 2016/7 also marked the start of a new three year club cycle with new Champions League and Europa League deals kicking in and so the growth is exceptionally strong with some €4.58 billion rolling in during the 12 month period covered.

On the Euros front, more than half the income generated (€1.024 billion) came from broadcast rights while total broadcast revenues for all of the organisation’s competitions topped €3 billion for the first time.

Last year’s event cost Uefa €595 million to stage, which represents a lower portion of revenue than in 2012. Total income, though, was hugely increased, from €1.4 billion four years ago although even that figured dwarfed the €40.9 generated when the tournament was staged in Sweden in 1992.

The scale of the profits this time out allowed Uefa President Aleksander Ceferin to announce bonus “solidarity” payments of €1 million to each of the 55 affiliated associations in Helsinki on Wednesday but the money will barely make a dent in the position of the organisation which had reserves of €632 million on June 30th last year.

The FAI benefits in various other ways from its largesse, most obviously by way of a centralised TV deal for qualifiers worth an estimated €10 million a year. Abbotstown also received the maximum €1.625 million in annual “solidarity” payments last year with this total including a basic €600,000 towards running costs plus €250,000 for participation in Youth, Women’s and Futsal competitions - as well as €100,000 for “implementing the women’s football development plan” and a similar amount for implementing the “good governance programme”.

The cost of Uefa’s committee system, which includes travel, hotels and payments to committee members came to €9.7 million, around twice what the organisation spent on what it described as its “social responsibility” projects. The flagship anti-racism programme it supports, FARE (Football Against Racism in Europe) received in €625,000 in direct grant aid while the Uefa foundation for children got €1.2 million and €31,000 was donated to natural disaster relief.

Income from Interest and investment was €5.67 million.

Club competition revenues continues to grow very substantially with the Champions League, Europa League and Super Cup bringing in a combined €2.45 billion, around three times the corresponding figure for 2007/08.

Manchester City did best on the prize money front with the premier league club picking up €83.9 million for their participation in the competition, almost €4 million more than Real Madrid who ended up as champions but the power of English TV revenues was demonstrated far more starkly in the Europa League with Liverpool earning €37.8 million after reaching the final; almost €4 million more than the club that beat them in the final, Seville, despite the fact that the Spaniards’ income was boosted substantially by having started out in the Champions League group stages.

1 Eamon O’Shea: We spent quite a bit of time talking about older people rather than to them
2 Aidan O’Brien targets historic eighth Epsom Derby win with strong hand
3 Valterri Bottas pips Lewis Hamilton to pole in Austria
4 Monica Seles: The warrior queen who could have been the best ever
5 Sport crosses its fingers yet again as ministerial merry-go-round gets another spin
Real news has value SUBSCRIBE
Crossword Get access to over 6,000 interactive crosswords