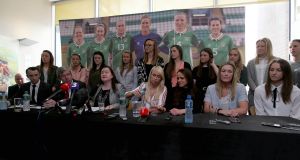 The members of the national women’s team appear to have secured just about all of the improvements they sought in their dispute with the FAI.

While there is no formal agreement on the issue of representation, there was confidence on the part of the Professional Footballers’ Association of Ireland (PFAI) that it has effectively established its position for the future.

The players returned to training on Thursday at Abbotstown despite a marathon mediation session that did not reach a conclusion until around 4am.

Although there was a reluctance to reveal the terms of the deal due to a confidentiality clause, it is believed that the players’ main goals, including a €300 match fee, win bonuses and compensation for loss of earnings, were conceded by the association.

Some aspects of the deal are subject to further clarification and both sides have agreed that they will avail of the services of the mediator, Peter McLoone, again when required so as to avoid a repeat of this week’s very public dispute.

The association is understood, however, to have agreed to provide the additional support between games or training camps, as had been requested. It is also understood that the two sides will review the terms of the deal with a view to updating its financial aspects on a campaign by campaign basis.

Afterwards, the FAI issued a short statement expressing satisfaction that the dispute, which the players said had effectively been rumbling on for years, was finally over.

“The association is pleased that both sides have reached common agreement and a settlement, which allows the two parties to move forward together as one, in the best interests of Irish football,” it said.

In a statement, Ollie Cahill, of the PFAI, said that the agreement: “Addresses all of the issues raised by the Republic of Ireland women’s national team. The PFAI would like to thank Siptu who stood by us and guided us throughout this dispute. We would also like to thank the public for getting behind our union and supporting these inspirational women and we now look forward to these players taking women’s football in Ireland to the next level.”

Ethel Buckley of Siptu described the deal as a “landmark agreement,” which was only possible due to “the organisation, bravery and commitment of the national team players.

“Their courageous action in publicly outlining their concerns provided their union representatives with a solid foundation from which to engage with the FAI and find a just resolution to this dispute.

“The events of the past two days’ amount to a short, sharp and successful campaign to advance the rights of women in sport. They are also a reminder that in any area of modern Irish society women should never accept being treated as second-class citizens.”

Apart from the aspects of the deal relating to financial and other supports, it is understood that new arrangements will be put in place to ensure that there is no repeat of the sort incidents described by players at their press conference on Tuesday when it was revealed that they sometimes had to change in and out of FAI tracksuits in airport toilets.

Apparently, those were also men’s tracksuits and that issue is to be taken care of as well.

On the issue of representation no specific agreement was reached on the status of the PFAI but Cahill was confident that their position was effectively beyond meaningful dispute.

“We represent the women, it’s as simple as that”he said.

The former Cork City player said that he thought that despite the very public nature of the falling out this week, there was an upside for the association in the unity displayed by the players.

“I think that with the way they stuck together through all of this, they have shown themselves to be a very special group this week and hopefully the FAI will be looking at that and thinking: ‘Yeah, if we get behind these players, they can go on to achieve great things.’”

Things will get back to something approaching normal on Friday when the squad trains again and team manager Colin Bell holds a press conference at Abbotstown.

The players will then continue their preparations for Monday’s friendly game against Slovakia in Tallaght over the weekend.