US women’s soccer team agree improved deal with US Soccer 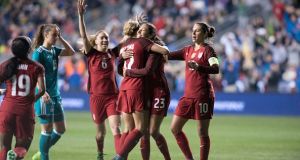 The US women’s soccer team secured an improved deal with US Soccer on Wednesday. Photograph: Kyle Ross/Getty

The United States women’s soccer team pressed its fight for equal pay not in one dramatic moment at the negotiating table, but in a thousand small ones away from it. In text messages and phone calls, in hotel rooms and on bus rides, and at their homes in far-flung cities, the players fine-tuned their needs and their arguments and their solidarity.

Sometimes the suggestions arrived in an overnight email from forward Alex Morgan in France, or a late-night one from midfielder Megan Rapinoe on the West Coast. They sent out anonymous surveys to their teammates, to better gauge what people prioritized but might not want to say aloud, and weighed in on legal language and PowerPoint slides in a cache of shared Google Docs.

As the talks intensified in recent weeks, players like Becky Sauerbrunn and Meghan Klingenberg conferred with teammates like Kelley O’Hara and Christen Press to propose changes as small as a single word in page after page of proposed contract language. Then they would rehearse what they would say at each negotiating session, and even decide who would say it.

The result of all those long days and late nights is the team’s new collective bargaining agreement with US Soccer, which was announced on Wednesday morning. The agreement includes a sizable increase in base pay for the players — more than 30 per cent, initially — and improved match bonuses that could double some of their incomes, to $200,000 to $300,000 in any given year, and even more in a year that includes a World Cup or Olympic campaign.

Yet while the women’s players can claim significant gains, including on noneconomic issues like travel and working conditions, the new deal does not guarantee them equal pay with the men’s national team, which the women had made the cornerstone of their campaign for much of the past year. For the union, that reality — a consequence of the teams’ different pay structures and an eight-figure gap in Fifa bonus payouts to US Soccer for the men’s and women’s World Cup — was balanced by progress elsewhere. It is those changes, including control of some licensing and marketing rights, which the union views as an opening to test the team’s value on the open market, that the players and their lawyers feel could pay off in future negotiations.

“We tried to completely change the methodology for how to define our value, and we made progress in that regard, and it changes the equation for the future,” said Becca Roux, the union’s executive director.

Sunil Gulati, the president of US Soccer, portrayed the agreement as a shared victory, an “equitable” deal that he said recognized the team’s achievements and kept U.S. Soccer at the forefront of the continuing fight for gender equity in soccer worldwide.

“We’ve always had the most highly compensated women’s team in the world, and this puts them at even higher level,” Gulati said. “Their performance over all over the last quarter-century has put them at the top of their game. Financially the agreement gives the players security in a way that they haven’t had before and adds a number of other things that were very important to them.

Gulati noted that the deal’s five-year term, through 2021, ensured that the next negotiation would not become an issue for the team in its next major competitions, the 2019 World Cup in France and the 2020 Tokyo Olympics. He also revealed that U.S. Soccer had agreed to pay the players for two years’ worth of unequal per-diem payments, the result of improvements in the men’s C.B.A. that were not accounted for in the women’s version.

But while the deal was completed this week, it was forged over the past four months, during which the players took active control of their side of the negotiations with a team of US Soccer negotiators — including Gulati — who had long been eager to do what they called an equitable deal but had bristled at the way the union went about it.

Initially, the talks had been framed as a simple equal-pay debate, a powerful wedge issue that hung over the talks from the start. It resulted in a lawsuit against the players’ union by the federation to enforce the old collective bargaining agreement but also in a federal wage-discrimination complaint signed by five top players that will continue even with the new C.B.A. complete.

Those legal fights were the most public salvos in what the top women’s players had come to view as a yearslong fight for respect and equal treatment. After the United States won the Women’s World Cup in 2015, in the richest year in team history, a group of players fueled by simmering resentments — artificial turf fields, travel in coach class, unequal per-diem payments — demanded that the union fight to win the richer contracts the group felt the players had earned.

The cause of equal pay seemed a successful strategy; it put US Soccer in the awkward position of defending what was effectively unequal pay for the same work, and it received wide news media coverage as well as the support of athletes and celebrities and even Hillary Clinton, who tweeted her support during the 2016 presidential campaign. But the tactic also proved divisive, forcing fans of the national teams to take sides in an increasingly nasty fight, and it hurt feelings inside the close-knit world of US Soccer, especially after some women’s players — riding high after their World Cup title — denigrated the on-field record of the men’s team while pushing their cause.

With the union’s negotiators and US Soccer barely on speaking terms late last year, the women’s players fired their lawyer and restructured the union’s leadership. The goal was to change the tone of the talks and, with the players more involved, to pivot toward a solution that veteran voices on the team soon came to call “equitable and fair” pay — a subtle but important shift.

Gulati, in a telephone interview on Wednesday morning, said the change in leadership, and in tone, had quickly opened the door to the discussions that produced a deal.

In addition to seeking improved, but not necessarily equal, pay, the players began to press for changes that they saw as vital to the long-term growth of their game. Those changes, they argued in detailed slide presentations during increasingly frequent negotiating sessions, would improve the game outside the narrow ecosystem of the national team and also establish a structure to support both their careers and those of the next generation of American women.

As a result, the new agreement includes commitments from US Soccer for its continued support of the domestic professional league, the N.W.S.L., as well as requirements that the federation improve standards in the league and — through sizable increases in camp and roster bonuses for players not under contract with U.S. Soccer — transfer money to players who exist on the periphery of the more established national team pool.

The agreement also reinforces the national team players’ commitment to the N.W.S.L. through their league salaries, while at the same time establishing a mechanism for them to pursue opportunities abroad, as players like Carli Lloyd and Crystal Dunn (in England) and Morgan (in France) have done in recent months.

The final breakthrough came last weekend in Dallas, when as many as 16 players — dressed in matching team gear in a row of chairs only feet from the negotiating table — took part in two days of marathon discussions with Gulati and US Soccer representatives. Helpful timing — the players were together in camp ahead of two friendlies against Russia this week — and the looming start of the N.W.S.L. season provided another needed nudge.

On Tuesday night, the players gathered in a drab conference room to hear the details of the agreement from their lawyers, including some benefits that had come to pass only in the final days. “Oh, we got that, too,” one player remarked, according to Roux. Then the completed document was shared electronically with all 22 voting members for ratification, while US Soccer’s board met on a conference call to give its assent.

“I am incredibly proud of this team and the commitment we have shown through this entire process,” Rapinoe, a player and a member of the union’s C.B.A. committee, said in a statement provided by the union. “While I think there is still much progress to be made for us and for women more broadly, I think the W.N.T.P.A. should be very proud of this deal and feel empowered moving forward.”