US, Canada and Mexico to bid for World Cup 2026 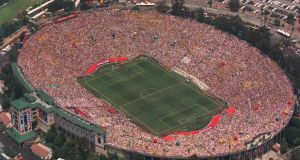 An aerial view of the Rose Bowl in Pasadena, during the 1994 World Cup final. Photograph: Mike Powell/Getty Images

A joint bid from the US, Canada and Mexico to host the enlarged 2026 World Cup is expected to be finalised this year for submission to Fifa, according to Victor Montagliani, the president of the region’s Confederation of North, Central America and Caribbean Football Associations (Concacaf).

Speaking before Saturday’s annual Concacaf congress in the Caribbean island of Aruba, Montagliani contrasted the prospect of the countries’ cooperating on a World Cup with the division represented by the wall along the Mexican border planned by US president, Donald Trump.

“Canada, the US and Mexico are aiming for a joint bid, the idea has been around for a while, discussions are continuing and it is a very exciting proposition if it comes to fruition,” Montagliani said. “We have had nothing but positive remarks about it and it is a very strong sign of what football can do to bring countries together.”

Asked if he was referring to Trump’s belligerent rhetoric about building a wall, Montagliani, a Canadian insurance executive elected as the Concacaf president last May, said football has to “rise above” all kinds of political regimes which many people dislike.

“It behoves football and leaders of football to deal with it and rise above it,” he said.

Although each country individually would have the infrastructure to host the World Cup alone, Montagliani said, a joint bid would be “a fit” with the new 48-country, 80-game format of the 2026 tournament. A final decision is likely to be taken “sometime this year”.

Fifa’s new process for countries bidding to host the 2026 World Cup, announced last year under the new presidency of Gianni Infantino, set out a period from June this year to December 2018 for the preparation of bids.

Evaluation of countries’ suitability by Fifa is scheduled for January 2019 to February 2020, with the final decision to be taken at Fifa’s congress in May 2020.

Concacaf’s proposed joint bid is considered by far the early favourite to host the tournament, which has not been held in the region since the US World Cup of 1994.

The previous Fifa president, Sepp Blatter, lobbied for the US to host the 2022 World Cup, as part of a continued push to grow football as a sport in the country, before a majority on the Fifa executive committee voted controversially instead for Qatar.

The development of the Concacaf bid, together with running a successful Gold Cup tournament this summer, is a key element in Montagliani’s campaign as its new president to refocus on football itself, following the arrests, criminal indictments and revelations of huge corruption at the confederation under his predecessors.

“It is still shocking when you think of the depth and breadth of the corruption; it was unbelievable,” Montagliani said. “You are in a very privileged position to work in football, 99 per cent of people would give their right arm to be in that position; it’s an honour, and to abuse it is unforgivable.”

Concacaf instituted governance reforms in July 2015 principally aimed at its internal constitution, and auditing and protection against the payment of bribes and kickbacks when TV, sponsorship and commercial rights are sold, which were rife under three previous presidents. In August, a new chief legal and compliance officer was appointed with responsibility for the new procedures, Guilherme (Bill) Carvalho, formerly the associate general counsel for Yahoo in the Americas.

“We have to rebuild the trust of the public, and that takes time,” Montagliani said. “We do not have council members doling out Goal [Fifa development] projects, media rights or dealing with sponsors; there is a clear process now, and although no method is foolproof, I have a fairly high comfort level that we have an integrity process in place.”

Legal proceedings are continuing, he said, to seek the return to Concacaf’s ownership of the centre of excellence built in Trinidad with $26m of Fifa and Concacaf money, which was revealed in 2013 to be owned personally by the long-term former president, Jack Warner.

An investigation by a Concacaf integrity committee, set up by Jeff Webb, the president elected in 2012 after Warner stepped down, accused Warner of committing fraud against Concacaf and misappropriating Fifa funds, by representing the centre of excellence as Concacaf’s when in fact it was built on land Warner owned and had bought for the purpose.

Warner, who is fighting extradition to the US where he has been indicted for allegedly pocketing multiple bribes and kickbacks during his 21-year presidency of Concacaf from 1990 to 2011, is defending the legal action, Montagliani said.

Chuck Blazer, the Concacaf general secretary working alongside Warner for 21 years, has pleaded guilty to multiple fraud, bribery and tax evasion crimes in the US, and has been an informer in the continuing US Department of Justice criminal investigations.

Webb, elected on the promise of reform and integrity following the Warner and Blazer scandals, was himself arrested in Zurich in May 2015 and pleaded guilty last year to having taken multimillion dollar bribes from TV contracts as soon as he became the president.

Montagliani described Webb as a man well-liked in football and his admitted corruption as “a horrendous shock.”

Alfredo Hawit, a Honduran lawyer and former professional footballer who was the interim Concacaf president after Warner’s demise, then became president again following Webb’s arrest, was then indicted and pleaded guilty himself last year to trousering bribes on TV deals.

“I couldn’t imagine such a crisis occurring in a company and the company surviving,” Montagliani said. “But you should never waste a good crisis. Football has survived because of fans and players, and now we have an opportunity to restore our image, and bring the game back to them.” Guardian News and Media

1 Eamon O’Shea: We spent quite a bit of time talking about older people rather than to them
2 Aidan O’Brien targets historic eighth Epsom Derby win with strong hand
3 Valterri Bottas pips Lewis Hamilton to pole in Austria
4 Monica Seles: The warrior queen who could have been the best ever
5 Sport crosses its fingers yet again as ministerial merry-go-round gets another spin
Real news has value SUBSCRIBE
Crossword Get access to over 6,000 interactive crosswords