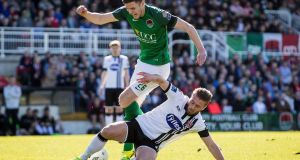 With close to 7,000 having attended their win over champions Dundalk in their last home game, Cork City anticipate another big crowd at Turner’s Cross on Friday night for the visit of Derry City (Live on RTÉ2, 7.30)as they bid to extend their winning start to the season to eight games.

John Caulfield’s side have already opened up a six-point lead at the top of the Premier Division table as they prepare to host a Derry side whose four-match winning start to the campaign ended when they lost at home to Bray Wanderers last week, their first game since the sudden death of their captain Ryan McBride.

“We always get a good crowd for Derry anyway, said Caulfield. “There is certainly a good vibe around the place at the moment and we need all the support we can get. The noise and the passion coming from the crowd does have an effect.”

Midfielder Greg Bolger could return from a calf injury for Cork, though club captain John Dunleavy will need to prove his fitness. Striker Achille Campion remains out injured.

Third-placed Derry travel without striker Rory Patterson who has been ruled out for up to three months with a fractured ankle.

Kenny Shiels, the Derry manager, may also be missing attacking midfielder Barry McNamee due to a hamstring strain while he has further injury concerns over defenders Dean Jarvis and Aaron Barry.

Sent off in the defeat to Cork a fortnight ago, striker Ciaran Kilduff returns from suspension for second-placed Dundalk’s trip to Finn Harps.

“We’ll have to produce some performance to get a result against them,” said Finn Harps’ manager Ollie Horgan, who doesn’t expect defender Damian McNulty nor strikers Ciaran O’Connor and Danny Morrissey to be fit due to hamstring injuries while midfielders Gareth Harkin (groin) and Barry Molloy (calf) are also struggling.