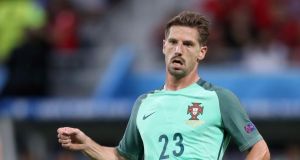 Leicester are working to overturn a decision by Fifa to reject their attempts to register midfielder Adrien Silva. Photograph: PA

Midfielder Adrien Silva has returned to Portugal as Leicester continue to wait on his availability.

The Portugal international is not allowed to train with the Foxes after Fifa blocked his £22million switch from Sporting Lisbon because his documentation was received by the FA 14 seconds after the deadline.

Leicester are still yet to hear whether the transfer will be ratified and Silva will continue to sit out when they host Liverpool in the Carabao Cup on Tuesday.

The 28-year-old has trained with the fitness coaches as the club formalise an appeal but Silva has returned home for now.

Boss Craig Shakespeare said: “He has gone back to Portugal for the time being. He is an expecting father so he spent a bit of time with his family at the weekend. Then we will see what the process brings from now on.

“The conversations I’ve had with him so far are very brief but of course in the back of his mind the World Cup will be a concern. But I think he is more interested in finding the right solution for here and now.”

To add to Shakespeare’s selection issues Jamie Vardy is a major doubt for the Foxes after coming off in Saturday’s 1-1 draw at Huddersfield.

The striker suffered a groin injury after scoring the equaliser from the spot and may not play with Liverpool due to return to the King Power Stadium in the Premier League on Saturday.

Shakespeare said: “Jamie hasn’t trained, we’ll give him every opportunity. He has a tight groin and he has had continuous treatment since. He won’t be one to risk so we’ll assess it tomorrow.”

Matty James is out with an Achilles problem while Christian Fuchs will not play because of a freak eye injury he suffered after being hit by a pole and Robert Huth remains sidelined after ankle surgery.

“Christian is more on specialist advise but he trained today with the team,” added Shakespeare.

“We’re also without Robert Huth, we are really managing him at the moment. He is well ahead of schedule after the operation and had a good start. We’re taking it carefully.”