Tickets for 2018 World Cup go on sale: Prices and how to get them 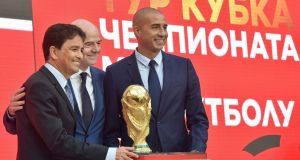 The first batch of tickets for the 2018 World Cup in Russia went on sale on Thursday morning.

This is the first of two distribution phases, with the application period running from September 14th to October 12th.

All these applicants will enter a random selection draw and will be notified of the outcome of their applications by November 16th. From that date until November 28th tickets will then be allocated on a first-come, first-served basis.

Tickets can be purchased on the Fifa website, where there are three types; match specific, specific to stadiums, or to a particular team.

Last year Fifa revealed the ticket prices, with the cost of the cheapest tickets available for foreign fans increasing more than 16 per cent since 2014.

Russian residents are being offered sharply discounted rates, with their cheapest tickets on offer at 1,280 rubles (approx €19) for group matches, an increase on the equivalent prices for the 2014 tournament but roughly in line with prices South African fans paid in 2010.

The Fifa secretary general, Fatma Samoura, said: “We wanted to make sure that we priced tickets fairly to make the events accessible to as many people as possible. We therefore conducted thorough market research and have priced the tickets accordingly.”

The special tickets for obese people, first introduced for the 2014 finals in Brazil, are again available for those whose body mass index exceeds or is equal to 35.