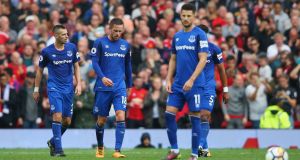 With hindsight, the optimism at Everton going into the season was just a touch misplaced. They had added several quality players in an unprecedented €117 million spending spree, while several young Everton players had starred in England U-20 World Cup win.

It was an exciting time for the club, though the factor that should have tempered everyone’s excitement was that most of the new signings had been paid for by the sale of their best player, Romelu Lukaku, to Manchester United.

Liverpool and Tottenham had taken the same approach when they lost Luis Suarez and Gareth Bale to Barcelona and Real Madrid respectively: take the money for the superstar and reinvest it in a clutch of new signings.

Both of these clubs had looked forward to their first post-superstar season with a certain foreboding, and in both cases that feeling turned out to be justified. But then Suarez and Bale each left as PFA Player of the Year at a time when they enjoyed legendary status among supporters.

Lukaku, by contrast, had become unpopular at Everton by the time he left – fans having become irritated with his too-obvious desire for a move to a bigger club – and even though Lukaku scored 40 per cent of their league goals in 2016-17, many convinced themselves that his loss would not be such a big deal after all.

The flaws of an unpopular player are always magnified; Lukaku didn’t work hard enough outside the box, didn’t have the first touch of a really top-level striker, went missing in big games, etc.

Yet even Lukaku’s biggest critics at Goodison would not deny that he is among the fastest and most powerful forwards in the game, and Everton’s new-look attack is dismally short on speed and power. Davy Klaassen, Wayne Rooney and Gylfi Sigurdsson are all good footballers but in a league increasingly defined by high-level athleticism they look like players from the 1970s.

The new striker, Sandro Ramirez, is still learning that he won’t get free-kicks for many incidents that might have been given as fouls in the Spanish league, so right now Everton’s attack consists of a lot of good passers with nobody to pass it to. Rooney is still the only Everton player to have scored in the league.

At Old Trafford yesterday the Everton fans mocked Lukaku until he scored the third goal and ran to gloat over them. The defeat ensured that Everton would drop into the relegation zone, below West Ham, which is not where anyone expected them to be after five games. Liverpool is not a patient football city, as Jurgen Klopp could tell Koeman, and the swift and farcical demise of Frank de Boer at Crystal Palace reminds us that Koeman could easily be two defeats from losing his job.

Chairmen know that relegation can potentially cost them hundreds of millions of pounds, and when the stakes are that high, few have the confidence in their own football judgment to keep faith with a manager whose team seems to have gone into a tailspin.

Elsewhere the table has assumed a familiar shape, with the three biggest-spending sides in the summer transfer market occupying the top three positions in the table. The two Manchester sides have identical records: four wins and a draw, 16 goals scored and two conceded.

You might therefore be fooled into thinking that the title race is a toss up between two sides of very similar ability. The reality is that City are the ones setting the pace, while United are doing well to keep in touch.

Nine of United’s 16 league goals have come after the 80th minute as they cut beaten opposition up on the counter. United’s formula is failure of opposition to equalise plus exhaustion equals the illusion of dominant attacking football. City are playing the real thing.

Watford under Marco Silva are a strong and well-organised side who were unbeaten before Guardiola’s team turned up at Vicarage Road and tore them to shreds. City got lucky with two offside decisions, but it is difficult to make the case that Watford were robbed when City’s superiority was so absolute. In the second half, their substitutes were Ilkay Gundogan, Leroy Sane and Bernardo Silva, who would all be automatic starters at most other teams in the league.

The difference between United and City is best exemplified by the question of who is the reference point for the team in midfield. For United, it’s Nemanja Matic, a tall defensive midfielder whose job is to project calm and stability.

For City, it’s Kevin de Bruyne, who is the most complete attacking midfielder in the league. No other player can match his combination of speed, skill and intelligence.

De Bruyne has not yet managed to deliver in England the sort of utterly dominant season he produced at Wolfsburg to persuade City to spend €56 million on him, but the arrival of Benjamin Mendy and Kyle Walker on the wings has simplified his task considerably.

They have given City the power and stamina they lacked last season and by constantly making themselves available out wide they create space for De Bruyne to work inside.

With the rejuvenated Sergio Aguero partnered by the dynamic Gabriel Jesus and supported by players like the Silvas, Sterling and Sane, De Bruyne’s situation is the opposite of the one facing, for example, Rooney at Everton; there are good options all over the field if he can make the pass, and he usually does.

The task of the chasing pack already looks forlorn, and United will deserve the gratitude of the rest of the league if they can prolong the title race to the latter stages.

Solskjaer requires more than Sancho to mount a title tilt 21:46
No fans, no problem as far as Tiger Woods is concerned in San Francisco 21:29
Second Waterford FC player to undergo testing after reporting Covid-19 symptoms 21:15
Crowd limits to remain at 200 as Government stalls move to phase four 21:15
Ryan Brennan secures the points for 10-man Shelbourne in Donegal 20:18

1 Crowd limits to remain at 200 as Government stalls move to phase four
2 Gerry Thornley: Irish system to face its acid test in front-loaded return
3 Different Strokes: Bryson DeChambeau’s rules debates doing him no favours
4 No fans, no problem as far as Tiger Woods is concerned in San Francisco
5 The Offload: Schools rugby talk in the Seanad appears tone deaf
Real news has value SUBSCRIBE
Crossword Get access to over 6,000 interactive crosswords