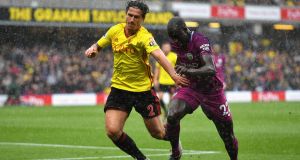 Jaws dropped and heads shook when Manchester City spent around £130m on three full-backs this summer. In financial terms that sum meant little to City’s infinitely rich Abu Dhabi rulers. But on the pitch the sense of those investments is becoming clear. They nearly complete City’s team.

The two most expensive of those full-backs, Kyle Walker and Benjamin Mendy, each cost more than £50 million, about double what City paid Real Madrid for the third, Danilo. Walker and Mendy could not be deployed together for the first few matches of this campaign because of injury and suspension, but they have started City’s last three games and the opposition have paid a heavy price. Liverpool, Feyenoord and Watford have been demolished by a combined score of 15-0.

In those matches Mendy and Walker dominated their flanks, flying up and down relentlessly in a way that showed “full-back” to be an outdated label. They also showed how far past it last season’s counterparts were, once-fine performers such as Bacary Sagna, Gaël Clichy, Pablo Zabaleta and Aleksandar Kolarov having become creaking thirty-somethings unable to contribute like the new thrusters.

“[Mendy and Walker] are having a big impact, Danilo too,” says Pep Guardiola. “They are young – Mendy is 23 and Kyle (27) is also young enough. They have huge energy to go up and it stretches our play and means we can have more players in the middle to do the short passes. I like our passes to be three, four, five or six metres, no more than that. It gives us continuity. We create spaces in behind and you need players in those positions. Without these signings it would have been more complicated.”

Guardiola’s description of the impact was particularly accurate at Vicarage Road, as Mendy and Walker’s raids enabled Kevin De Bruyne and David Silva to flit in-field as they pleased. The pair tormented the hosts. De Bruyne, mind you, is evidently exempt from his manager’s six-metre guideline, his visionary short- and long-range passing making him a marvellous law unto himself.

Silva, too, conjures at will. His cross from the left led to Nicolás Otamendi nodding in City’s fourth goal at Watford. With Sergio Agüero scoring a hat-trick, creating a goal for Gabriel Jesus and allowing Raheem Sterling to convert a late penalty, the hosts were overwhelmed despite not playing badly. City could have hit double figures.

For all that, City have also benefitted from other factors during their recent run: Liverpool were weakened by the sending-off of Sadio Mané, and Watford were missing their first-choice centre-backs through injury and complained, correctly, that two of City’s first three goals should have been disallowed for offside. Those are important details even if it can feel like nitpicking to point them out given how formidable City have seemed. Similarly, the fact that Watford hinted at lingering problems in City’s central defence when they threatened from a couple of late set-pieces does not mean that Guardiola’s team did not deserve to win heavily. But the Catalan knows his team are not perfect. “After this [win at Watford] it looks like ‘oh no, we cannot improve. But of course we can improve! There are still movements and actions we can improve.”

Guardiola notes the progress from last season but also knows that the biggest gauge so far of how much they have improved will come at the end of this month, when they travel to Stamford Bridge. Antonio Conte’s team beat City home and away on their way to the title last season.

“I think we have made steps forward,” he says. “Last season we did not win a game away in the Champions League and now we have done that. We won a lot of games away in the Premier League [12 OUT OF 19]but this kind of performance [against Watford] we did not see. We will see when we go to face last season’s champions what our level is.”

1 Seán O’Brien: Anger over my parents’ break-up never left me
2 Dan Martin keeping it day-to-day as Vuelta proves challenging for riders
3 Gibson-Park, Earls and Kelleher all in race to make Ireland’s French finale
4 Madness or defiance? The GAA is taking a huge gamble in staging Championships
5 Peter O’Mahony ready to battle his way back into Ireland’s backrow
Real news has value SUBSCRIBE