Emergence of Ruben Loftus-Cheek a major positive for Southgate 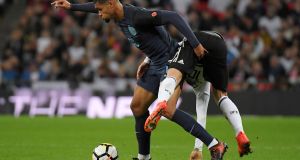 Gareth Southgate has been buoyed by the emergence of Ruben Loftus-Cheek and Harry Winks, just months after expressing his concern about England’s dearth of midfield options.

England kicked off their World Cup preparation friendlies against reigning champions Germany on Friday, when an inexperienced side made light of injury troubles in an entertaining 0-0 draw.

Loftus-Cheek was one of five players to make his debut against the world’s top-ranked side and produced a man-of-the match display, just as Winks did when making his bow in last month’s 1-0 qualifying win in Lithuania.

The 21-year-old midfielders offer an exciting glimpse of the future and improve midfield options that Southgate was bemoaning just months ago.

Asked if the assured debuts of Loftus-Cheek and currently injured Winks made him feel more positive about his options, the England manager said: “Yeah, and I think the slightly different system opens up different possibilities.

“In the position Ruben played (against Germany), you could play Dele (Alli) there, you could play (Adam) Lallana there, so that different sort of profile of midfield player with a deeper one behind.

“I think we need the stability of the three behind that at the moment, but also all of those guys at the back use the ball well.

“At times it was difficult for them to press us because of the composure we showed and the system we played, so I think it was a brilliant experience for our players.”

Five-time World Cup winners Brazil lie in wait at Wembley on Tuesday, giving England another chance to hone the three-man back line against elite opposition.

“In the qualification games tactically you have got very few questions to answer and you’ve got the same problem to solve,” Southgate said.

“I haven’t liked us in a 4-2-3-1. Our positional discipline with the ball has not been good.

“(On Friday night) we had to be tactically right with and without the ball. That’s the nature of top games.

“I think the players have taken those concepts on really well. They’re a bright group, they get it.

“But also we’re asking them to not just go and play, but to think about what they’re doing all the time — where do they need to press, how do they press, not just blindly going and chasing around the field and playing with their hearts.

“We’ve got to be a team that are switched on because against the very best if you get the pressing wrong then they’ll carve you apart. It’s happened a couple of times (against Germany).

“I think that’s one of the most pleasing things of working with this group over a period of time. They’re responding to that.

“I think they experience some of that with their clubs as well and (against Germany) a very young team — I think in the end, by the time we made the changes, five debutants — really took those things on board well.”

Southgate knows “we’ve still loads we can get better at” but believes their display against Germany offered encouragement to England fans, as did the new faces given a run-out.

Everton goalkeeper Jordan Pickford produced a string of fine saves on an impressive first senior appearance, but Joe Hart will be between the sticks when Brazil visit on Tuesday after Jack Butland’s broken finger caused a re-think.

“It was just a straightforward goalkeeping drill, nothing out of the ordinary and just caught his finger awkwardly,” Southgate said, having confirmed England Under-21s goalkeeper Angus Gunn will join the seniors for the first time.

“We would have played Jack in the game against Brazil. We were always going to play Jordan (on Friday night), but we’ll now play Joe on Tuesday.”