Final warning: 10 Ireland players a booking away from suspension 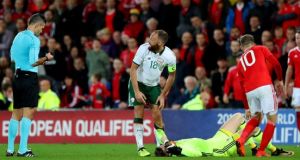 David Meyler is booked for a challenge on Wayne Hennessey at the end of Ireland’s win over Wales - ruling him out of the playoffs. Photograph: James Crombie/Inpho

As improbable as might have seemed during the fledgling stages of Ireland’s World Cup qualification campaign, David Meyler’s absence will be keenly felt against Denmark on Saturday night.

Deployed by Martin O’Neill in a holding midfield role, Meyler was a destructive presence against Serbia and Wales, screening his back four superbly and providing a reliable link between the defence and midfield.

However, a late foul on Wales goalkeeper Wayne Hennessey in the dying embers of Ireland’s 1-0 win in Cardiff earned him a yellow card, thus ruling him out of Saturday’s first leg in Copenhagen.

Glenn Whelan is set to replace Meyler in Martin O’Neill’s starting XI - but the Hull City midfielder will be available for next Tuesday’s second leg at the Aviva Stadium.

It remains to be seen, though, who will be free to line-up alongside Meyler for next week’s final act of the qualification campaign.

Indeed, a grand total of 10 Ireland players head into Saturday night’s clash a booking away from a one-game suspension.

Essentially, the spine of Ireland’s team.

To have any chance against the Danes Ireland can’t afford to be anything other than full-blooded at the Parken Stadium.

However, they also can’t afford to take to the Aviva pitch next Tuesday night without a raft of their key players.

This is something Roy Keane - who inspired Manchester United to the 1999 European Cup final knowing he would miss the game through suspension - alluded to earlier in the week.

But he insisted Ireland’s player shouldn’t let it play on their minds too much: “I don’t think that would be a conversation I’d be having with players - I’ve spoken to James McClean before and he’s done the opposite!

“I know players look at me and think `we’re not really going to listen to you on that aspect of the game' but that’s where the experience comes in.

“The players know what’s at stake. Robbie Brady got a card before for kicking a ball away and that’s where it’s a bit silly. It goes back to trusting the players and if a player kicks the ball away, he deserves to be suspended.”

And it’s not just the Irish players who will need to stay on the right side of referee on Saturday, with nine Danes a booking away from suspension.

Saturday’s clash will presumably be a cordial affair, but if it gets heated plenty of stellar names could be mere interested observers in Dublin next week.

1 Ireland backrow of O’Mahony, Van der Flier and Stander to be retained against England
2 ‘Your father works for my father’: Schools rugby turning toxic in the stands
3 Triple bogey costs Rory McIlroy as Adam Scott prevails at Riviera
4 Newcastle feel the heat as Arsenal get some of their old mojo back
5 On healing and wild hurling: The re-education of Diarmuid Lyng
Real news has value SUBSCRIBE
Crossword Get access to over 6,000 interactive crosswords